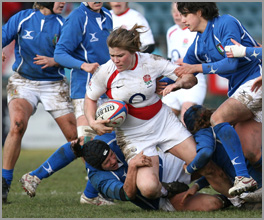 On paper its been a perfect year for England womens rugby captain Catherine Spencer. The skipper has led her country to a fourth consecutive Six Nations title as well as a Nations Cup title in Canada, and interest in the game in England is on a high as it prepares to host the Womens Rugby World Cup in 2010.

However the season will only be given a real thumbs up if England can pull off victory in the two test series over World Cup rivals New Zealand in November when the world champion Black Ferns come to town.

England last faced the Black Ferns in the final of the 2006 Rugby World Cup losing 25-17 and will know few specifics about their opponents who havent played a test game in almost 12 months.

The thing about New Zealand is that they are very natural rugby players and from 1-22 they can play, Spencer said.

Theyve all got great handling skills and thats something weve been developing since the last World Cup. We have always had a strong pack and in the World Cup final in 2006 I felt we had the measure of them up front but since then our forwards have added mobility and better all round skills to our game. Though its clich to say it, were now playing 15-man rugby which will stand to us against teams like New Zealand.

Freshly returned from the Nations Cup where England were crowned champions after wins over South Africa, France, Canada and the USA, Spencer feels the standard of the game at national level has markedly improved.

Having South Africa there this time was fantastic and it really added another dimension. I had played them in 2005 and 2006 but since then they have massively improved as we had beaten them by 80-odd points back then but by 25 in Canada.

USA were extremely physical and they were a tough side and it looks like France are getting back to the form they were in a couple of years ago.

However while the score-sheets show how dominant England were, there are areas Spencer agrees that her side need to work on.

We werent perfect by any means. The South Africa game for example was a day when we simply had a bad game and we were very disappointed with how we played. They put us under pressure and we werent able to build phases.

She disagrees that the performance that day, where England fielded without a smattering of first choice players, points to a lack of depth in certain areas.

Over the last few years weve deliberately used a lot of players and we took 26 to the Nations Cup so everyone saw a lot of action. We were still without plenty of strong top players though like Maggie Alphonsie and Tamara Taylor. Everyone cant go to the World Cup and the players know that so everyones having to work very hard to be involved."

Spencer points to strong debuts from the likes of Heather Fisher as growing evidence that England have got top talent waiting in the wings.

"Heather has been around the squad for a while and is a great 7s talent but shes been able to transfer her skills to the 15s game and she had a great debut against the USA. We also had some strong performances in the backs, especially around our back three where I thought for example Kat Merchant had a great competition. Shes a player whos really come on this year and has added more dimension to her game.

Spencer also feels that England have learned some harsh lessons this year following a loss to Wales during the Six Nations and other less than convincing performances along the way.

Wales deserved to win on the day no doubt but we were gutted. The thing was though that in some ways that loss was not a bad thing in the long run. There were England players in that side who had never lost in an England shirt and I feel you do need to experience that kind of disappointment so you remember what it feels like and you do your best to make sure it doesnt happen again. There had been some pressure going into the game because we had been on a record unbeaten run and actually that loss lifted that afterwards and we reacted well with good games against France and Scotland.

Englands top players will now revert to club and Super 4 action in the coming months before the final squad selection for the New Zealand games, which also includes a third A fixture.

The Super 4s will act as the England trial and then well focus on the New Zealand games, Spencer explained.

As a player its hugely exciting to play the World Champions, whether youre male or female, and it will be a great benchmark for us to see where we are at as well as learn a bit more about them. I played at Twickenham with my university team and a couple of times with England and its been a fantastic experience, This would be even more so as well be playing after the England V All Blacks game. You cant assume youll be picked but I would love to captain England at Twickenham.

For Spencer, the season just passed has also offered her special opportunities by virtue of her status as the England captain. Having been appointed an Ambassador for the Tag Rugby Development Trust, she spent several weeks coaching primary school children in Uganda earlier this year, an experience she says she will never forget.

I have been involved for few years with the trust and was I really keen to tour with them and it really was an enriching experience. I met the Uganda ladies captain there and though there are only a few teams competing in Uganda they are making a big push to get more players. Experiences like that are a real privilege and I hope to be involved in the charity for a long time.