Image: Catrina Nicholas who will flank for Wales this weekend. 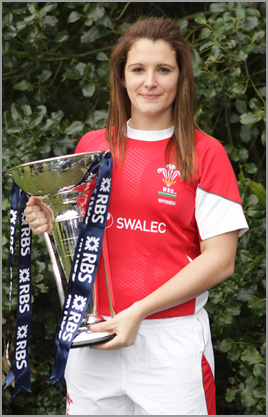 Wales have rejigged their midfield for their clash against France this weekend with experienced centres Naomi Thomas and Clare Flowers returning from injury. Both have been named in the midfield for this weekends game, with captain Mel Berry returning to her more familiar number 8 spot after filling in at centre against Scotland.

Thomas has missed the start of the womens 6 Nations due to a long-term knee injury and will be a major boost, while Flowers suffered a shoulder injury against England and missed the victory over Scotland a fortnight ago.

In another positional shift, Rachel Taylor returns to lock after filling in for Berry at the base last week.

Laura Prosser retains her place at scrum half, while Rhian Bowden, who came off the bench to make her return after injury against Scotland, starts at hooker for the first time in this campaign.

Wales head coach Jason Lewis said, Naomi Thomas is one of the most naturally gifted footballers in the womens game and its great to have her back along with Clare Flowers. Ceri Redman did excellently in our first two games after making her international debut against England which is great for our strength in depth in that area.

This is a crucial game for us, theres no doubt about it. If we beat France we have a really good chance of finishing within the top two for the third consecutive season which would be a real achievement.

Wales were on track for a Grand Slam last season before coming unstuck in France where they lost their only game of the Championship and Lewis says that the loss will serve as motivation this year.

Losing in France last season is something that still hurts. We had beaten them earlier in the season at the European Championships and we were guilty of underestimating them in the Six Nations. We certainly wont make the same mistake again and well have to be on the button both in attack and defence if we are to answer the questions France will ask of us. They will be a much tougher proposition than Scotland, although they lost to the Scots on the opening weekend.