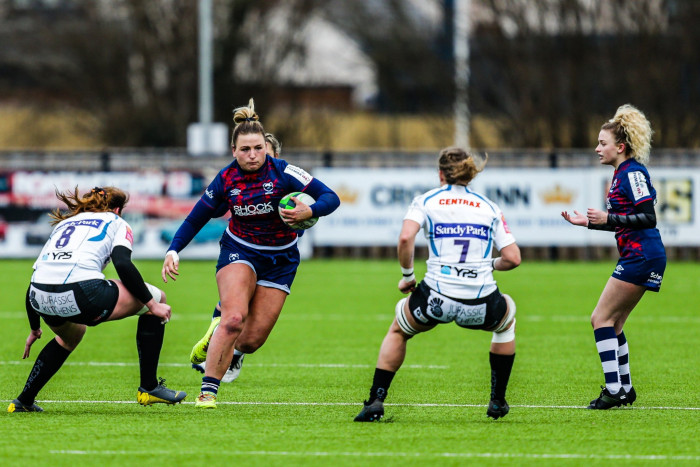 Stef Evans prides herself on being a problem solver.

She’s outspoken and unrelenting in her defence and support of the women’s game and especially given the lull of the current pandemic it seems like the sport needs people like her more than ever to continue to drive change, writes Lucy Lomax.

The Bristol Bears forward recently launched the popular #icare campaign which you may have come across on your social media channels, dedicated to showcasing support for the women’s game and demonstrating how people actually do care that the Women’s Six Nations was postponed after an influx of misinformed comments online. But Stef has a history of taking action. Back in 2018 she wanted to help rectify another issue in the sport for female players- rugby kit.

The Canadian launched her apparel company Ruggette RFC with the intention of providing female rugby athletes with clothing made specifically for them, but also to help prove that women's rugby is a viable industry in and of itself and deserving of support and investment.

Stef spoke enthusiastically on the Gain Line Podcast recently about why she set up Ruggette RFC and of wanting to change the message we’re sending to the female playing community if they’re constantly reminded that the kit they wear isn’t specifically made with their bodies in mind.

“Setting up Ruggette RFC came from a selfish place as I just wanted to wear rugby shorts that I felt nice in and that were comfortable and fit me properly,” says Evans. “And from a wider perspective what I wanted to do with the brand was fix the messaging that we’re sending to women and girls who want to participate in our sport.

“If you are new to the sport as a girl or as a woman and you’ve just gone to your first couple of training sessions and you’re in love with the whole experience and you want to commit, then you have to go and buy stuff like boots, a mouthguard and something to train in that isn’t going to get ripped constantly. The message that we’re sending to those women and girls when they go online and go to the brands that make their team’s kit and they can’t find anything that’s made for them or when it’s all designed for men, is that you’re not important. How can you believe that there’s a place for you in a sport or community when that sport or community has nothing for you to play your sport in? We wear men’s boots, we wear men’s clothing and we’re somehow convinced that that is normal and if you flip it, it become laughable.”

Stef continued to describe her amazement of how companies are often happy to plough millions of pounds into men’s sport without the return on investment for years or even decades, but less willing to dedicate the same resource into women’s sport whilst at the same time arguing that the market isn’t profitable.

“Another reason I set up Ruggette RFC was to provide metrics to prove that this market is viable. For whatever reason which I don’t fundamentally understand, there seems to be this inability to look at the participation numbers in women’s rugby and then look at the average purchasing power of females in the western world, especially the demographic that play rugby of ages 16-38, and combine those two numbers and not see that as a huge opportunity.

“For whatever reason people are not sure and think they might lose money and I think how would you lose money? Women make the most purchasing decisions in the average household, usually young professionals, usually involved in their communities, heavily incentivised to be a part of their rugby community even if they’re no longer playing and likely to financially support the sport by buying merchandise and coming to games. You don’t see that type of long-term financial investment from a consumer in other markets, it’s much more casual. And then you look at the fact that rugby is the fastest growing sport in the world, the amount that it’s growing year on year, plus the fact that there is almost no competition for that type of athleticism in women’s sport, plus the fact that it’s cheap to play and you’re not ever going to have accessibility issues in terms of equipment. You look at all these factors and numbers and for whatever reason people are still not entirely sure it would be a market.”

Stef also commented how the resistance to think outside the box spreads further than just the apparel market.

“The same mindset is what keeps people from representing female athletes in agencies or approaching them for sponsorship opportunities or putting money into their women’s programmes, or from sponsoring the Women’s Six Nations tournament and I just can’t wrap my head around it.

“We have no problem doing it for men’s sport. Any time as you put money into men’s sport it’s immediately viewed as you’re building capital for some sort of future even though the reality of that is you usually don’t make money for thirty years and even if you do, you had to put in millions in every single year on the road to that but for women’s sport if you’re not in the green from day one then it’s not a viable market.”

Despite the challenges, Stef is on a mission to change the status-quo. Through Ruggette, #icare and her own social media accounts she can be found pumping out helpful information daily to help individuals get involved, support the women’s game to grow and eradicate inequality.

To listen to the full interview with Stef around her rugby journey, her ideas alongside launching the #icare campaign and how she hopes to continue to make a difference, head to Episode 3 of the Gain Line Podcast.