Steinberg looks ahead to US growth

As he prepares his side to head to Europe for a three test Autumn international series, we put our questions to USA head coach Pete Steinberg. He tell us what his hopes are for USA rugby as a whole, and what he's expecting from two games against France and Italy in the coming weeks. 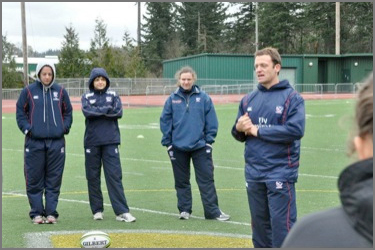 When you joined as head coach you talked about developing an expanded playing pool for the 2014 World Cup by the end of this year - have you achieved that and how?

"I think we are well on our way, but we still have some work to do. With the focus on 7s, we have a chance to look at some younger player and we have a number of young players, especially in the backs. The camp we had in the summer with the top 75 players and the All-Americans was a great step forward for giving players the chance to play at a high level and develop."

You said recently that the USA Domestic Competition is not sufficiently preparing the top players for international competition - how does this need to change to help you?

"I believe that the club game is critical to the development of the game in the US. The role of clubs is to recruit, retain and develop players. There are some great clubs that provide the players with a great development opportunity. However I do not believe that the club game is suited to being the highest level of play for US players. The size of the country make that very difficult and expensive to have the best players to play, but you will see teams traveling with less than 22 because the cost of the travel is paid for by the players - and players only travel when they know they are going to play.

We need to put the players into elite, high level games in games where they are under pressure to perform. That was the role of the week long camp in July that was very successful. We expect to hold similar events next year where the best players come together in elite environments and play in highly competitive games. This will be the highest level of play for the domestic player."

What are your aims for your upcoming European tour - two games against France and one against Italy?

How have you prepared for the tour?

"We had a 3 day camp at the Colorado Springs Olympic Training Center. We brought together 43 players and went through our approach to play. We have selected 30 players to go on tour."

"Our goal for 2014 is to get back to the final in 2014. We showed at the Nations Cup that we have the ability to play with a top team like England, but we also had problems reproducing that performance."

"It has been a really exciting development. We have 10 full-time players at the Olympic Training Center and hopefully that program will expand. Those players will be available to play 15s at the World Cup and that will be a huge boost for the team. The Olympics also encourages cross-over athletes from other sports to consider Rugby."