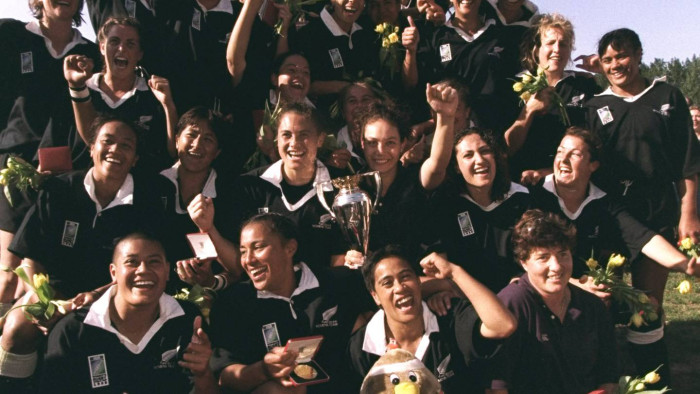 More has been unearthed and documented recently about the first two Women’s Rugby World Cups in 1991 and 1994  than ever before. A book about the 1991 pioneers will be out shortly, while the 1994 story is due to be told via a play in Scotland next year. But what about the rest? In the lead up to the delayed 2021 World Cup being played in New Zealand next month, we’re exploring some of the other major tournaments.

First up an in an extract from the book ‘Scrum Queens – the story of women’s rugby’ we look at the 1998 World Cup in Amsterdam. The World Cup in 1994 had been due to be held there, before being cancelled with 90 days notice, but this time it did go ahead.

The year itself had already proved to be seminal.

The 1998 Home Nations brought silverware for Scotland, who had used the momentum from hosting the World Cup in 1994 to build a strong squad. They’d already run England close on a few occasions and wins over Ireland, Wales and France (who were invited to play friendlies in the competition before they became an official team within it) lined up a winner takes all game at Inverleith against England, which they won 8-5.

Donna Kennedy, speaking to me about the game over 20 years later, also remembered it vividly:

“There was just a massive sense of belief that we could do this. England was always the big scalp to beat. They had a big brutal pack and had pacey backs, so we knew we’d be in a game. It was a huge win, and the elation was phenomenal. It was just a different feeling on that day to anything I’ve had since and it’s still our only grand slam. It is such a special memory and the fondest I have in my career. Special times with special people."

On the other side of the world, Australia and New Zealand had also upped their preparations with five matches against each other. In 1997, Australia headed to Dunedin, with Australia’s Selena Worsley later recalling how hostile the home fans were.

“I remember every single window in the town was about the All Blacks. Our game was a curtain-raiser and the middle fold out of the Otago Times  was  a  cut-out  shirt.  When we ran out on the field there were already 40,000 people there. They booed us and you could hear a really loud rustling of newspapers as everyone pulled out their cut-out jersey!

“Melodie Robinson was playing for them, and she was holding me back from a scrum, so I went to hit her hand and she split my eye with a whack! It was memorable. That whole week wherever we went we were just getting abused! They absolutely live and breathe rugby there. It was brilliant."

Neither  side  played  again  until  the  World  Cup,  but  the  experience of these clashes stood them in good stead. Both would end up ranked in the top five sides in the world by the end of 1998.

After the false start in 1994, the Dutch rugby union got the go-ahead from the then IRB to host the 1998 Women's Rugby World Cup.

The games would all be held at the recently opened National Rugby Centre in Amsterdam.

This time New Zealand, who had not travelled to the 1994 event in Scotland,  would be the big threat.

The  USA  - winners in 1991 - were  considered  dangerous  but  they  had  not  progressed much results-wise between the two World Cups and had been thrashed by the Kiwis at the Canada Cup the year before.

England were the reigning champions, but their defeat to Scotland in the Home Nations meant they could likely be vulnerable.

The tournament was by invitation, with 16 sides taking part.

Australia and Germany were the only two sides playing in a World Cup for the first time.

The hosts  kicked  the  competition  off  with  a  tense  and  competitive game against Canada in front of around 1,700 fans.

Canadian flanker Joanne Gardner stood out while the home side’s diminutive full-back Wieneke Tielen was player of the match thanks to her fearless tackling.

Unsurprisingly for  a  16-team  tournament, there  were  some big scores posted on the opening day. England thrashed Sweden 75-0 with Vicky Brown scoring five tries. The USA beat Russia 84-0.

Ominously, New Zealand beat Germany 134-6, finishing with  an  astonishing  22  tries  and  12  conversions  against  Germany’s two penalties. Eight of the tries were shared equally between brilliant full-back Tammi Wilson, who had also played rugby league and touch rugby for her country, and right-wing Dianne Kahura. Wilson kicked five conversions for a personal total of 30 points.

Captain and hooker Farah Palmer issued a warning to the other teams after the game:

“We never ease up. That’s not what we are about. In fact, we hate to concede points, but good luck to the Germans. They did not give in and deserved their two penalties”

The Germans amused the crowd by their show of delight on scoring  their  points,  with  players  backflipping  back  to  the halfway line.

Spain impressively beat Wales 38-18, the game a triumph for  winger  Isabel  Perez,  who  ran  in  four  tries.  There were  no  huge  upsets,  though  Ireland’s  loss  to  Kazakhstan  was  a  mini surprise – the Irish losing 12-6 thanks to tries from Olga Kumanikina and Svetlana Zhernovnikova.

The last quarter-final saw France particularly disappointed to  miss  out  on  a  semi-final  slot  as  they  were  beginning  to  develop a strong team. Full-back Annick Hayraud, a future national team head coach, was impressive and Estelle Sartini on the wing proved a handful. Ultimately Canada’s tough defence stood firm to help them win 9-7, with prop Gillian Florence and hooker Moira Shiels outstanding.

The semi-finals were surprisingly one-sided.

New Zealand’s team was proving to be considerable, with strength out wide like no one had seen before. Louisa Wall and Vanessa Cootes were powerhouses, while England were not helped by injury to their inspirational skipper Gill Burns going into the game.

Either  way,  New  Zealand  were  favourites  and  played like it.  Anna Richards told me afterwards that the Kiwis knew they’d be a handful:

“We were a really good team going over there. We had a very mobile pack and a lot of brains across the team for the game. Our starting backline – well all bar one was in the New Zealand touch team so we had a lot of skills out there and Daryl our coach had basically said play what is in front of you. He was confident in us to run the ball off our own line – he told us to have a go.We had all been hugely disappointed not to travel to the 1994 event and we had a group of girls who had been playing for a number of years and were waiting for this. We felt we wanted to prove a point that we were a good side and we were confident in ourselves.”

England started strongly with two early penalties from Claire Frost, but New Zealand were relentless and by half-time the game was very much in their hands. They built a 10-6 lead after an opening try from Annaleah Rush, who went on to score the winners’ first 13 points and finished with 24, including a second try .England scored one try through winger Jane Molyneux, but ultimately lost 11-44.

Cootes – nicknamed the ‘Black Dot’ by her team-mates because that’s all anyone would see once she ran off with the ball – was among the scorers in the second half.

“We did about the best we could against them for 30 minutes, when we had them rattled, but they are a great side and justify their status as the best in the world. Our goal has to be to come back stronger and aim to beat them next time.”

In the other semi-final,  the USA hammered rivals Canada 46-6, using all their previous World Cup experience to brilliant effect.

They raced into a 31-3 half-time lead and ultimately achieved a victory by six tries, five conversions and two penalties. The result was sparked by dominant individual performances from full-back Jennifer Crawford, who had three tries, and outside-half Jos Bergmann, who added five conversions. Canada worked hard but struggled to match the physical strength and incisive running of the winners, with just two Moira Shiels penalties to take from the game.

In the World Cup Final New  Zealand  were  unstoppable,  winning the first title of many thanks to a brilliant display of power and pace in a 44-12 victory.

Cootes grabbed the headlines with her four brilliant tries.

On the other wing, Wall was also superb while the team was well led by Farah Palmer in the front row and was well organised by Richards at fly-half

Russia, never  far  from  controversy,  finished bottom in 16th place by losing 3-23 to Sweden. An unfortunate incident occurred after lock Galina Chasovnikova was dismissed early in the second half for persistent high tackling.

In a subsequent official communication, publicised by the IRB, it was recommended that ‘the Russian coaching staff be charged with ensuring their players are coached in proper tackling skills. The very fact that all the players have a penchant for high tackling is a direct ref lection of the coaching they receive.’

Was the first ‘official’ World Cup a success?

Crowds were certainly not massive and many players bemoaned being in hotels miles from anywhere, but with 16 teams, the event gave invaluable competitive game time to a large number of players. Crucially, the IRB footed the bill for the first time.

The one-location event also gave the games something of an intimate feel for the players. They still had to contend with varying weather that veered from biting cold in the opening days to 30-plus-degree heat as the days wore on.

But despite the teething problems, it was something to build on.