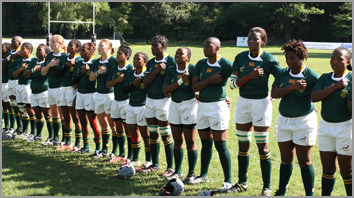 South African coach Denver Wannies has selected his strongest available line-up for his sides opening World Cup against defending champions New Zealand. The SA match 22 shows just two changes from the team who beat Scotland 41-17 in their previous outing in June in Lasswade.

Daphne Scheepers has forced her way into the starting line-up at inside centre ahead of Charmaine Kayser, who played in that position against the Scots. Scheepers is now one of the reserves and one of only two backs among the replacements.

The other change is reserve flanker Nombulelo Mayongo who replaces Tami Faleni, ruled out of the tournament through a shoulder injury. Otherwise the team picks itself on the back of four convincing performances earlier this year against Kazakhstan and Scotland.

Mandisa Williams will lead the team from the flank where she forms a formidable back row with fellow loose forwards Namhla Siyolo and Lamla Momoti.

Wannies, said that despite the good results of late, his team is still the underdog against three times World Cup champions New Zealand.

New Zealand will field a formidable team despite not playing any matches this year. They have an outstanding pedigree and we are pretty much the outsiders. It will be a classic case of the top side in the world versus the underdog, but that does not mean that we will not be competitive.

We are not here to complete the numbers and this team is tremendously proud to represent South Africa. They work very hard during the past year and are hungry to prove themselves against the best in the Womens game, cautioned Wannies.

The South Africans has settled in well since their arrival on Monday at the Surrey Sports Park in England. On Tuesday the had team two training sessions will have one more for Wednesday before customary Captains Run on Thursday afternoon.

The Springbok Womens team to face champions New Zealand on Friday at 17h15 (SA time) is: