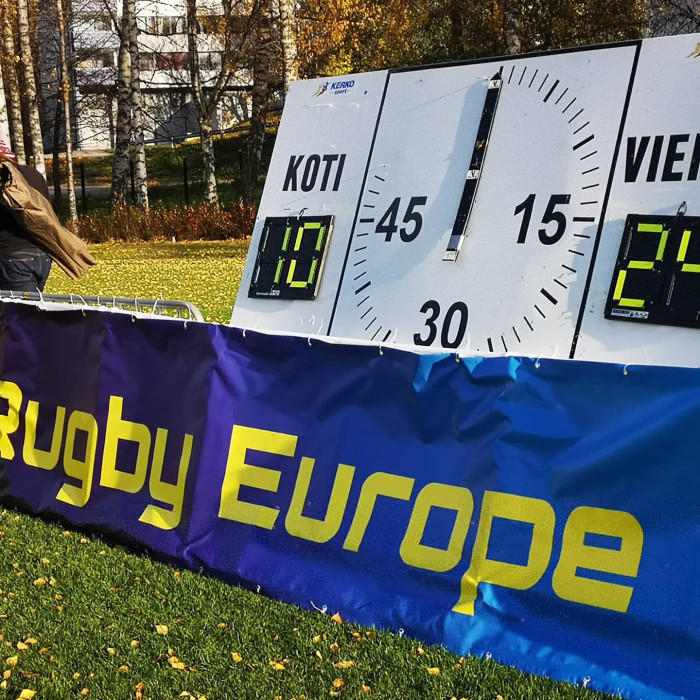 Sweden had won all three of the teams’ previous meetings, but they gave always been hard fought, attritional, contests, and this was no different.

A sunny (if windy) autumn day attracted a good crowd to the small tree-lined ground in Myllypuro, on the eastern side of Helsinki. 19 players received their first international caps, 7 for Finland and 12 for Sweden.

Finland had the best of a nervy opening to the game, Ida Herrgard bundling over the line after six minutes with the Finns had taking advantage of a series scrums and penalties.

Sweden nearly struck back 10 minutes later when a great run by Minonna Nunstedt cut through the Finnish defence. Emma Skagerlind was tackled just short of the posts before the ball was work right only for Michelle Johansson to knock-on when over the line.

The clearance kick failed to find touch, Sweden maintained the pressure and three minutes captain Tove Viksten finally grounded the ball under the posts. With the kick, Sweden led 7-5.

Sweden continued to dominate possession for most of the rest of the half without adding to their score, so it was against the run of play when Finland scored their second try just before the break. A tapped penalty worked quickly left found wing Venla Lehtonen who squeezed through to score, giving Finland a 10-7 advantage at half-time.

Sweden continued to play most of the game at the Finnish end as the second half began, but it was not until 56m before they finally added to their score. An attempted clearance kick from Finland was charged down by Victoria Petersson, Emma Skagerlind hacked the loose ball ahead and then won the footrace to touch down. With Petersson converting again Sweden were back ahead 14-10.

The constant Swedish pressure began to tell on the Finns, and as they tired gaps began to appear. Six minutes after their second try, Sweden scored their third, stretching the Finnish defence to create overlap that Linda Hakansson from which took full advantage. 19-10

The final quarter of the game saw Finland’s best period of possession, testing the Swedish defence but it was Sweden who made the game’s final score from the final play of the game, again moving the ball quickly wide this time to find Carina Trinh who scored in the score. 24-10.