New Zealand became the first team to claim back to back World Cup 7s titles as they added the trophy in San Francisco to the crown won in Moscow in 2013. 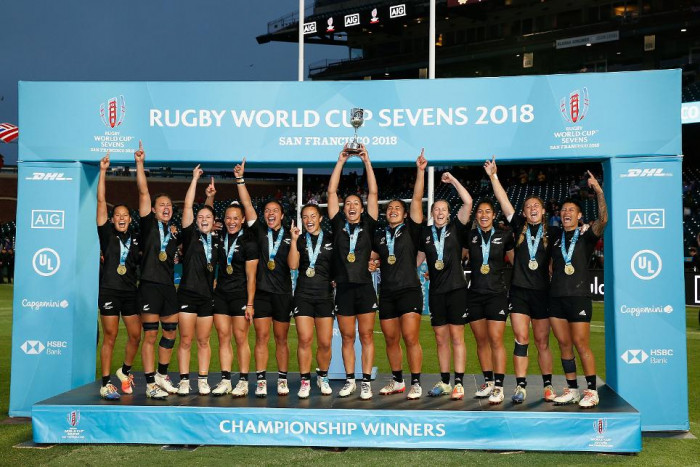 New Zealand became the first team to claim back to back World Cup 7s titles as they added the trophy in San Francisco to the crown won in Moscow in 2013.

France finished second, having reached their first ever World Cup final, Australia third and hosts USA fourth. Having been knocked out by Ireland in the opening game, England went onto win the Challenge Cup though faced the ignominy of finishing 9th, highlighting both the brutal format of this competition and a reminder of the challenges they are having in turning their resources into success.

France were surprise finalists, but their defensive effort against Australia and their fine finishing more than earned them their place in the final, with the impressive Anne Cecile Ciofani accelerating around the outside to secure break the deadlock with the final play and secure a 19-12 victory.

But in the final New Zealand were far too good winning 29-0.

They had the perfect start when Michaela Blyde raced away for her seventh try of the tournament after some good work by Tyla Nathan-Wong.

Their second try came midway through the first half after they turned defence into attack from deep in their own half with a charging run from captain Sarah Goss and calmness from her team-mates to recycle the ball and create the space for Portia Woodman to run in her sixth try in 2018 and 18th in RWC Sevens history.

Nathan-Wong crossed for a third try to make it 15-0 at half-time and put the Black Ferns Sevens on the verge of repeating their victory in Moscow in 2013.

France were unable to find a way through the resolute New Zealand defence and it was left to Blyde to score two quick-fire tries to put the finishing touch on their 27th consecutive victory and pull clear of USA speedster Naya Tapper in the race for the HSBC Top Try Scorer award.

World series champions Australia bounced back from their last-gasp loss to France in the semi-finals to claim the bronze medal with a 24-14 victory over USA. Evania Pelite and Cassie Staples gave Australia the perfect start but two tries from Naya Tapper , who was brilliant all weekend, kept the hosts in the hunt to repeat their bronze of Moscow 2013.

Ellia Green, though, also scored twice, one of them collecting a sublime cross-field kick from Charlotte Caslick in diving over the line.

Spain claimed fifth place with a narrow 12-7 win over Ireland, who were already guaranteed their best-ever finish in RWC Sevens history after beating Russia earlier in the day with 2013 runners-up Canada having to settle for seventh after beating the same opponents.

The teams battled for ninth to 16th places had already provided plenty of drama before the Championship semi-finals with Japan captain Chiharu Nakamura scoring with time up to snatch a 15-14 victory over Fiji and set up a Challenge final showdown with England, the more comfortable 38-0 winners over China.

The final saw England start promisingly with Holly Aitchison scoring in the corner before captain Abbie Brown drove through the middle to create a 12-0 lead. Yume Hirano reduced Japan's deficit before the interval only for England to dominate the second half, scoring 19 unanswered points and ensured that they finished their time in San Francisco with silverware.

In the other placing matches, Fiji proved too strong for China with Raijieli Daveua scoring twice in a 38-0 win for 11th place, while Beatriz Futuro Muhlbauer bowed out after 14 years in the national team and three RWC Sevens on a winning note after Brazil's 22-0 defeat of South Africa for 13th. There was also cause for Papua New Guinea to celebrate after two tries from Gemma Schnaubelt saw them power past Mexico 32-0 to record their first ever RWC Sevens victory.

New Zealand captain Sarah Goss received the UL Mark of Excellence award before lifting the coveted trophy, while France's Anne Cecile Ciofani was named the TUDOR Women's Breakthrough Player of the Tournament accolade after impressing in her first RWC Sevens and scoring the last-gasp winning try against Australia in the semi-finals.