Suggitt to lead USA 7s side

Ric Suggitt, the former Canadian men’s and women’s rugby national coach, has been appointed as the USA Women’s Rugby 7s head coach. Suggitt joins the Eagles after four years with the Canada men’s side and takes over from Sue Parker. 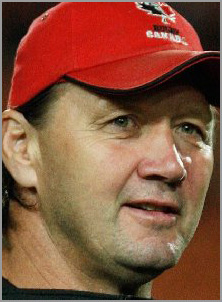 Suggitt will take on an ambitious womens 7s structure in the USA, the nation who last year launched a city-based womens 7s league. The USA womens 7s side also competed in the first ever Women;s World Cup for the short form of the game last year and were also at the Dubai 7s in December.

I am honoured to be selected as the new Head Coach for the USA Women's Sevens program. I am very familiar with the North American rugby landscape and look forward to working within USA Rugby system. The timing for me is perfect, my batteries are recharged and my family and friends are excited about the prospects of linking up with the USA Rugby organisation, Suggitt said.

He added: I hope to bring some international experience and to build on the most recent success of the last Sevens World Cup,

I am delighted that we have been able to find a coach for our Womens Sevens Team who has so much international experience in both mens and womens rugby, USA Rugby CEO Nigel Melville said. The interview process was very competitive and now I look forward to working with Ric in his new role and help to develop a world class sevens program.

As a player, Suggitt had to leave the game at a young age because of a number of serious shoulder injuries. He then turned his attention to coaching. He has over 20 years of experience, starting his coaching career at Clansmen Rugby Club. In 1999, Suggitt joined the Canadian national organization and has since enjoyed success in the Youth, Mens, and Womens programmes. He helped the Canada mens side reach the Rugby World Cup in 2007.

There are no secrets in this game, Suggitt finished. We will work hard to find the correct formula that will make the program successful. We will need to compliment our fitness with our skill level to reach our ultimate goal.