Super Series faces criticism ahead of round 2

The facilities on offer for the top five sides in the women's game at the ongoing Super Series in San Diego have been criticised ahead of the second round of games. 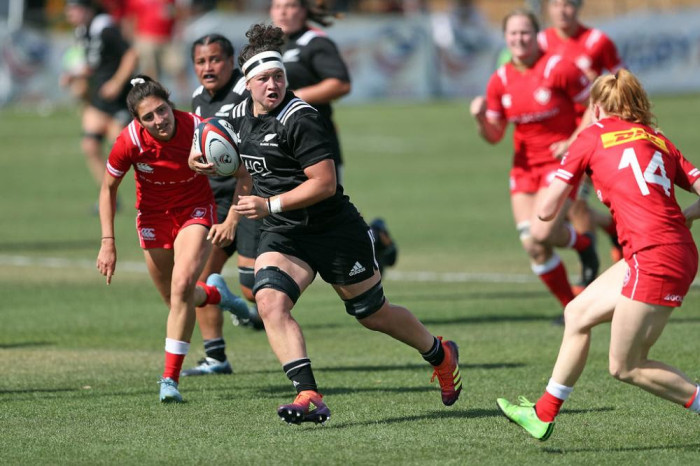 England and New Zealand won their opening games against the USA and Canada, with France set to play in the second round of matches.

The opening games, held at the USA's training centre, were played on a poor-looking surface which players and coaches are believed to be unhappy with, as well as the facilities on offer around the ground on match day.

New Zealand sports broadcaster Scotty Stevenson, who has regularly covered the progress of the Black Ferns, has used social media to set out a series of criticisms including that the changing rooms are tents with portable toilets and that fans are asked to bring their own seats to games involving the best women's players on the planet.

USA Rugby has defended the ground saying that it was "proud" to host the series at the venue but conceded that "pop up facilities were needed close to the pitch and the practical setup was discussed with all the teams ahead of the tournament."

On the experience for fans it added: "While the venue is not specifically set up to host a large number of spectators, it was important for us not to limit attendance. Therefore opening the larger space for fans, despite not having stands or seating infrastructure."

World Rugby, who arranged for the series to take place, faced a logistical challenge to keep costs down while also ensuring that teams like New Zealand could attend with the US seen as a reasonable travel compromise for all involved. However questions will rightly be raised about whether the Chula Vista centre was the right location and offers the sort of field and experience that the world's top players should expect.

In round 1 England scored the day’s opening try within seven minutes and would go on to record a convincing 38-5 bonus-point victory against the hosts, USA. Rolling mauls turned out to be England’s go to weapon with two tries resulting. The first coming from Kelly Smith in the 8’ after she picked up from the maul and buried the ball between the posts. The other would come later in the second half where the line out was just off the US try zone and Heather Kerr was able to fall over the line.

The lone US score came from veteran Hope Rogers after a powerful drive through tackles in the 16’ and reaching over the line. Alev Kelter’s kick would go just wide, missing the conversion.

England kept pressure the whole way through, with sharp attention on ball movement form the United States. On two occasions, Emily Scarratt and Natasha Hunt were able to interrupt USA passes and break away into open space. Through the second half, the Red Roses remained in control, keeping the ball in the United States end. Sevens stars Alev Kelter and Kris Thomas showed flashes of brilliance with two line breaks up the middle and on the outside respectively. Despite the drives and pushing the goal line once or twice, the Eagles struggles to find the try zone. A physical game none the less from each side.

“We learned today that if we don’t take the opportunities we create, we’ll find ourselves in a dogfight,” noted USA Head Coach Rob Cain, “The nice thing is, everything we’ve looked at these last six months, they’ve showcased. “The reality is, we gave four tries away. You can’t hide from it and situations like that create a lot of stress and allow opposition to have breathing space."

England head coach Simon Middleton said: “It was a tough game, a very physical game which we expected. We couldn’t quite get our attacking game going but our set piece was really good at times. I thought the USA were outstanding for the first 10 or 15 minutes of the game in particular, they were very physical and came at us. However, what we did do was defend outstandingly well. So attacking wise plenty to work on but we really put in a great defensive shift. It is a bonus-point win and it gets us up and running. Everyone has got some game time under the belt now and there is a bit more conditioning with the heat so we're really pleased with the overall outcome of the game.”

World Champions New Zealand began their campaign with a hard-fought 35-20 victory against Canada, who won the last edition of the tournament in 2016. Canada held a strong line to start the match but New Zealand managed to sneak through off a series of pick and goes for the first try of the game. Canada answered back with Gabby Senft hitting a streaking Elissa Alarie who weaved her way in for the score.

After another Black Fern score, Canada’s Brianna Miller got Canada within one point, adding back-to-back penalty kicks. New Zealand notched another try to go up 20-13 at the half.

In the second, Canada’s patience paid off with the forwards going inch by inch and Sophie De Goede getting her first try on top of her first cap. Although Canada put up a strong defensive effort, New Zealand powered through to come out with the win, 35-20.

“I think the ladies did a great job. We just have to clean up a few things on attack and really focus on keeping ball in hand,” said head coach Sandro Fiorino. “It’s four games in 12 days so the focus is on recovery, watching the video and cleaning up those things that we talked about.”

Coming off the bench in the second half was Jacey Grusnick, earning her 37th cap just nine months after giving birth to her first child. Starting scrum half Brianna Miller showed her skill, ending the match with two conversions and two penalty kicks.

Both sides have made a raft of changes to their teams, something expected at this stage in a World Cup cycle, with new patterns and combinations being tried out.

Sevens star Kelly Brazier has been named in the reserves too, her first time in the Black Ferns jersey since the 2017 Women's World Cup Final.

Coach Glenn Moore said: "We all know how talented Kelly is and she can cover 10, 12 and 15. Kelly brings experience, she reads the game well, and is brave on defence. She has a calm head and is conditioned to playing on the big stage. She will bring a steadying influence to the back line."

USA have made ten changes to their starting team and five to the bench.

Among the changes are up to three Eagles who will play for the first time this tournament including starting hooker Katy Augustyn, center Amy Talei Bonte and reserve Nicole Strasko.

Tuesday’s lineup will also see Captain Kate Zackary shift to No. 8 with Bui Baravilala playing fullback and Bulou Mataitoga in at wing.

USA team here
FRANCE v CANADA
France sat out round 1 and have named an experienced pack with some newer faces in the backline. Romane Menager has been ruled out through injury and her place in the squad goes to Brandy Carzola from Toulouse.

The pack looks formidable with Safi N'Diaye, Gaelle Hermet and Audrey Forlani having all been in excellent form earlier this year while Agathe Sochat and Lise Arritcastre are wily front row players. The backline does have a feel of an experiment about it with Pauline Bourdon and Jessy Tremouliere left on the bench. Their spots are filled by Laure Sansus and Elise Pignot who will be looking to make an impression with their chance.
Annick Hayraud, French manager said that the competition offered excellent World Cup buildup.
"The idea is to live like we will do in a World Cup with a match every four days. We will spend almost a month together with the players so the behavior of everyone, whether the staff or the players will be essential on and off the field for us to learn."