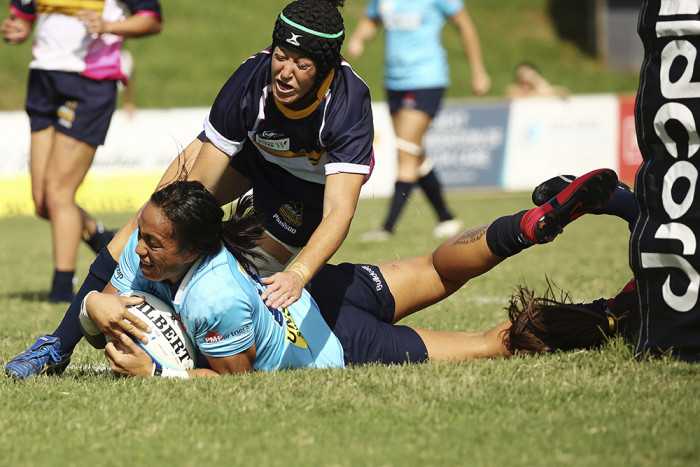 NSW went three from three after beating Brumbies 24-5 in another dominant performance in the Buildcorp Super W Series at at Pittwater Rugby Park, Sydney on Saturday. Chloe Leaupepe dominated the scoring with 19 of NSW’s 24 points.

The Brumbies started the game with a few errors that allowed the reigning national champions and league leaders the bulk of the early possession. But despite some good attacking play by NSW to get them inside the opposition 22, consistent, strong defence was a positive for the Brumbies through the first half.

Kate Brown’s sin binning for a high tackle 18 minutes in cost the Brumbies, as just a few minutes later NSW took advantage with the first score on the board through Leaupepe, working her way through the Brumbies defenders, before diving over under between the posts.

In the final 10 minutes of the first half, possession evened out and the Brumbies began to challenge NSW into their own half. It was NSW’s turn for a yellow card just five minutes before the break and the Brumbies did not take long to take advantage through Charlene Gubb, closing the gap to just two points, 7-5. at the half time break.

Again the Brumbies took a bit of time to settle into the second half as they did in the first, and it was NSW who started, Leaupepe running in her second try for the game, just two minutes after the restart to stretch the lead to 14-5. Even so, NSW showed an uncharacteristic lack of composure with several errors which cost potential points as they repeatedly pushed into the opposition 22 only to lose the ball.

Finally, Shanice Parker spotted a big gap in the Brumbies backline and raced through to dive over the line for the home team’s third try, Leaupepe’s conversion moved the score to 21-5 with just 10 minutes left.

A penalty goal via the boot of Leaupepe added three more points to the total with just six minutes to go.

Melbourne Rebels fell to a second big defeat going down 60-0 to Queensland in Brisbane on Sunday.

Queensland’s pack dominated at the Ballymore Stadium, particularly at the scrum, with their bigger forwards evident from the outset. Sarah Riordan put Queensland on the board within the first two minutes, but Melbourne defended well and the second try did not come until 15 minutes later through Sammy Treherne.

A prolonged passage of play just 10 minutes in saw the Rebels with consistent possession but again they could not break into the Queensland 22, and as soon as the lost possession a third try for the Reds came through Lori Cramer, utilising the width of the field and leaving the Rebels defence wanting as the lead extended to 17-0 to close out the first 20 minutes of the game.

Power in the breakdown and scrum, as well as fast use of the ball, was the difference between the two teams – a fact that was underlined as Riordan grabbed her second try with a run up the wing from some good cross field passing. With Lavinia Gould’s conversion the score moved out to 24-0.

When light rain started to fall 10 minutes before the break, the humidity and moisture added another aspect to the quality of play. There was a rare patch of forward movement by the Rebels late in the half but it was quickly shut down.

As the second half began the Rebels jumped out of the blocks and really looked for attacking opportunities, but the wind was taken out of their sails when Riordan found her way to the line in the 46th minute for her third of the game, taking the margin to 34 points following Gould’s conversion.

A yellow card to Tessa Brown a few minutes later was not what the visitors needed at a time which required all hands on deck to make an impression on the Queensland line. As a consequence, Queensland scored their next two tries in quick succession through Cheyenne Campbell and teenager Lefau-Fakaosilea, to push the margin out to 46 points.

As the game continued it became obvious that Queensland were relying on the power of its scrum and using it effectively as part of the overall game plan. When prop Vuanumasei Rasolea came off the bench late in the game it wasn’t long before her impact was felt.

She drove to the line having taken the ball from a standing start and carried four opponents with her in a display of sheer power which moved the score to 58-0 with a kick to come.

The Rebels only made it into the opposition 22 for the first time in the 79th minute and that really told the story of the match. On the positive side, Ash Marsters and Cormick were the strong performers for the Rebels and to their credit, the women in blue did not stop trying all day.