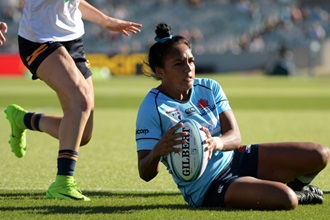 Queensland runners up in last year’s campaign opened with a 17-try 112-0 win away to the Melbourne Rebels on Sunday, sparking concerns over the lopsided nature of the tournament in its second season. Melbourne shipped 239 points in four games and lost the parallel fixture 60-0, but this year that total was almost passed in the first half alone as Queensland went in 53-0 to the good.

Lori Cramer being on target with the boot just made thing worse for the Rebels as she converted 13 of her 18 kicks.

Champions New South Wales also began with an away win, beating the Brumbies in their opener as 26-0 scoreline, thank to principally to three first half tries that put them 19-0 up at the break.

Rugby Australia CEO Castle admitted there was a need to ensure every team in Super W was consistently competitive but it wouldn't necessarily happen immediately. No 8 Grace Hamilton scored two of the eventual four tries, gaining 104m on her own – nearly a fifth of the ground NSW gained in the match.

“I don’t think any competition where you have a 112-0 scoreline is great,” she said. “I congratulate the Queensland girls, I thought their performance was amazing but I also know is that playing in a competition where you’ve got that outcome is not great for the Rebels girls.

“We do need to make sure that we’re looking at ways of making sure that the best talent is playing in the competition and I know that those are the types of conversations that we will be having.”

“I know it’s early days, it’s only round one and when we started last year, the round one performances of all five teams weren’t as strong as it was when they finished and I’d expect that to be true this year as well. But uncertainty of outcomes are important in any competition, so we would certainly be looking to see if we can even up some of those opportunities.”

Castle said the semi-professional nature of the competition, with most players working full-time jobs or studying, made it difficult to ensure capped Test players were spread across every club.

“All of those overlays are important considerations,” she said. “It’s not as simple as saying we’re going to pick up a Karmichael Hunt and a Quade Cooper and move them to different parts of the country.”

Queensland captain Kiri Lingman said she would welcome strategies to spread talent, including temporarily relocating players for the competition.

“I think it’s a fantastic idea because there’s a lot of talented girls – and that’s not taking anything away from teams like the Rebels or Brumbies, they just don’t have that depth yet,” she said. “And that’s just because they’re young franchises and they’re growing in their states. And it’s not over-running the whole state and what they have there, it’s just taking a couple of key players that can go down and have an impact for that Super W period is a great idea. Not just for stepping up the competition but for the expansion of the game.”

The problem for Rugby Australia os that Queensland and NSW are by far the strongest states and have dominated Wallaroos squads over the last year. Queensland’s depth was enough to have four internationals start on the bench for the opening game.

NSW coach Matt Evrard said the spread of talent would evolve as the competition continues. “The talent is actually quite shared among the states - even though we do have quite a few starters and so do Queensland, we played an opposition on the weekend that had five Wallaroos in their squad and we had another couple of Wallaroos come out of Melbourne and there's a lot in the WA squad,” he said.

“So, it can be quite shared but how far apart our teams are and we're not really playing in a professional code either, it does make it quite difficult for the girls to move.

“There was a fair few movements around early on in the season, good to see those girls get out and get starts for other teams.”

The big test for the tournament will be this weekend’s visit by Western Australia to Queensland. Western Force – third last year - need to show that they will be competitive otherwise the remaining four weeks pool play could be a very predictable lead in to another New South Wales/Queensland final