In the same conditions as four weeks before in Finland, Sweden took om a British Police XV at Imber Court on a cold Friday evening. 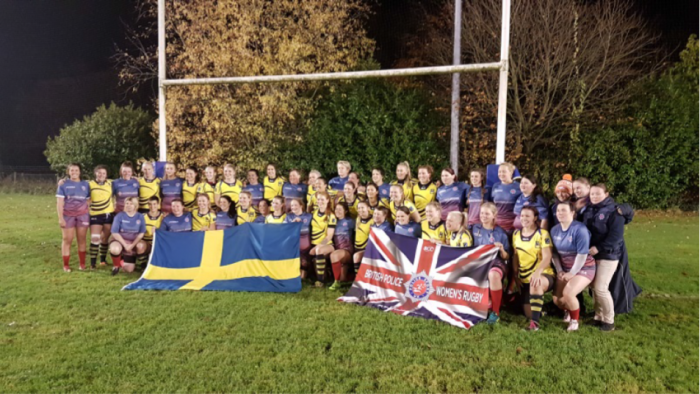 Report with thanks to Swedish RFU and British Police

Sweden played their usual game, making good use of a strong front five, mobile back row and quick runners in the back line. The difference in this game was the opponent’s game plan. Did Sweden had to defend over the whole width of the field in Helsinki, whereas the Police women more “up front”. Making use of their big forwards the Police kept the Swedish pack very busy stopping the attacks, rather than attacking themselves.

At the end the Swedish skills outclassed the Police and especially Victoria Petersson had a productive evening.

After an effective warm-up, where the Swedish players had also made their presence known by training in the second half of the pitch, it was time for the game to get underway. Following the anthems of both countries, the British Police Ladies lined up, ready for the first kick off of the game. Lizzie Ballentine, playing 10, signalled that the team were ready to the ref, and the game got underway, The Police Ladies kicking down the field into the waiting, receiving arms of one of the Swedish forwards who took the ball with no problems.

The first tackle was made, which gave every indication of how hard this game was going to be, both physically and mentally. The Swedish, in their yellow jerseys, pressed up in attack at every opportunity, the Police forwards working hard to defend and clear out the rucks in attempts to steal the ball back, and gain possession and attacking opportunities. The team were relentless in their defence, making tackle after tackle and putting on the pressure to try and make Sweden make mistakes that would mean advantages for the Home team. After 10minutes of defensive play, Sweden managed to create an overlap, allowing Sweden’s Elizabeth Sonnenholzner to run in the first try of the game in from the wing. Petersson then converted , meaning that Sweden had taken the lead of 0-7.

Unfazed by this, the Police Ladies moved back up to the halfway line, and restarted the game. Again, the kick was taken confidently by Sweden’s forwards, and the British Police resumed their strong defensive play in the rucks, scrums and line-outs, successfully managing to get the ball and have some attacking play of their own, the ball moving through the forwards out to the backs. However, despite the play, the ball was turned over and Sweden again were back in possession, looking to get the ball to the wings for the second try of the match. British Police winger, Emily White, anticipating the play, managed to intercept the ball and make ground in the direction of the try line, but a penalty was given by the referee against the Police for holding onto the ball. Sweden, again in possession managed to score the second try of the game by Emelie Hellgren. This again was converted by Petersson, bringing Sweden up to a 0-14 lead.

Two further tries by Sweden in quick succession by Felicia Radovan and Olivia Palmgren, brought the visitors to a 0-33 lead at half-time, with Petersson converting 1 out of 2. Kiri Lose, Helen Lion and Hannah Sherlock had made brave efforts to try and prevent Sweden from getting over the try line, but were unsuccessful due to the pace and depth from which the Swedish players were running. Despite the score, the British Police Ladies kept showing their resilience in their play, never allowing their heads to drop and running in support of each other, whilst Ballentine kept control of the backline.

After a half-time pep talk from the coaches, Ballentine and Lose, the second half of the game started, with the Police Ladies now attacking in the direction of the Clubhouse. The pep talk re-focused the team, pointing out the strengths of the half and what needed some attention, in particular, pushing up the defensive line as a unit. The fitness of the Swedish 7’s players were becoming clear against the Police Team, who remained relentless in their play. The first 15minutes of the second half saw Sweden score a further three tries and 2 conversions including tries by Carina Trinh, Tove Viksten and more points for Petersson, bringing Sweden to a 0-52 lead.

At this point, there was a clear change in the way that the Police Ladies started playing, with the next phase of play in favour of the Home team, and saw Hannah “sit down” Sherlock running lines, which saw one of the Swedish player literally bounce off her as she misjudged her tackle on Sherlock. Spurred on by support from the spectators, The Police Ladies kept their composure and built phases of pay from the halfway line, in which a try in favour of the Police, was inevitable. The forwards rucked hard to protect possession of the ball, with Libby Peak, Kelly Robins, Fiona SIM and Katie Louise working tirelessly in the phases of play. Spurred on by the supporters and with composure, it was #22, Vicky Rivers that managed to get the ball over the line and the first try for the Police Ladies, bring the score to 5-52. Helen Lion kicked the ball just short of the posts, and the game was reset for the ladies to receive a kick from the Swedish. The try electrified the team, with phases of play upped in their intensity, and a second intercepted pass by Emily White showed that the Police team were finally playing the match in their style. The final phases of play were soon being called, and the ball ended up in the hands of Petersson, who ran in the final try of the game. Petersson missed the final conversion of the game, and the match was finished with a 5-57 win to Sweden.