Sweden have won a thoroughly entertaining European Trophy game against Czechia, taking them within one win of the title. 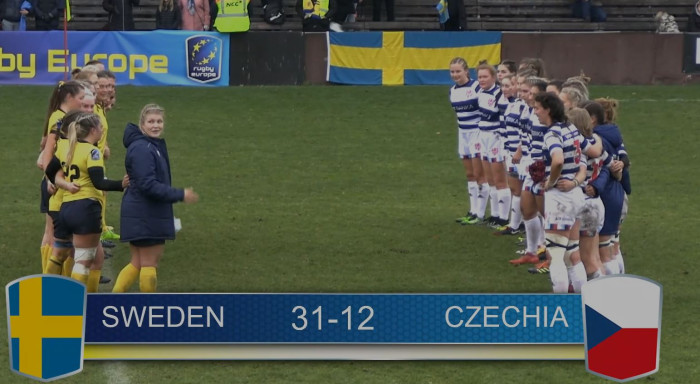 Sweden kicked off in a cool overcast Norrköping, and within seconds Sofya Smolina nearly opened the scoring, before being tackled into touch, but she made no mistake four minutes later, taking full advantage of a overlap on the left to put Sweden ahead 5-0.

Czechia were soon putting pressure on the Swedes, but found it difficult to break into their opponents 22. Sweden were showing an advantage up front, and when returned to the attack with a great maul to set up a period of pressure in the Czech 22 which, in the 21st minute, gave Sweden a second try from Tove Viksten, converted from near touch by Victoria Petersson.

Czechia were full of ambition and idea – and a perfect kick through by Julie Dolezilova got her team on the board after 31 minutes, chasing ahead her own kick own and scoring near the posts. Sweden 12, Czechia 5

Sweden’s maul continued to be an effective attacking option and just before half time gave their third try with Sara Lennvall getting the ball down. Another good conversion gave the home team a 19-5 lead at the break.

A yellow card early in the second half against Tove Viksten gave the Czechs an advantage, and another kick through almost gave them a second try, but this time it was the Swedish defence that won the race and held out until Viksten returned.

The Czechs continued to press without reward. Then in the 70th minute a thumping tacked from Viksten achieved a turnover which ultimately lead to a fourth Swedish try, this time from Petersson. 24-5.

In the final minutes a tiring Czech team was unable to stop a great break by Emma Skagerlind, who set up Minonna Nunstedt to score under the posts, 31-5, but the final score was for the Czechs, Julie Dolezilova breaking away for a consolation try under the posts. Final score Sweden 31, Czechia 12.

Only Switzerland can now stop Sweden from winning the European Trophy.