Sydney 7s has its trans-Tasman final

The Sydney 7s will have the Australia v New Zealand final that the organisers wanted… and it’s an outcome that has never seriously been in doubt. 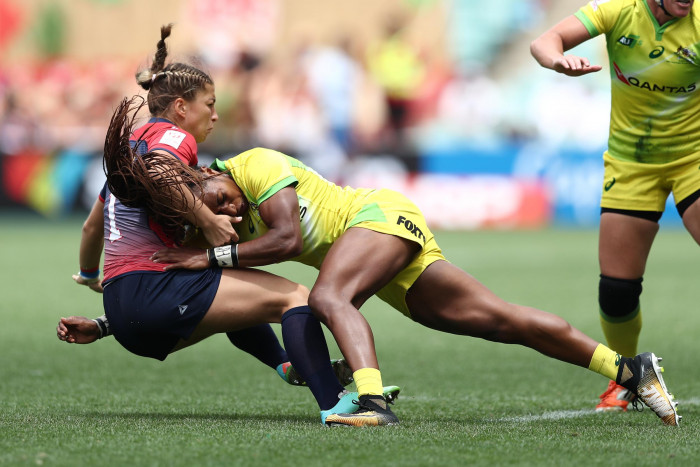 You get the impression that, if anything, the gap is growing between these two teams and the rest of the world. Since the Olympics the United States are the only team to have inflicted any damage at all, and even then not consistently and only with their strongest teams.

On Day 2 in Sydney Australia repeated their Day 1 opener with a game with Spain, and achieved and identical result – 29-0. It was near perfection. Despite Spain playing well they only threatened to score once. New Zealand similarly saw off Ireland with a six try win, and despite every effort from the Irish to try to hurry the Ferns by giving them as little space as possible.

The other quarters were closer. USA and Russia played for not just a semi-final spot, but also the fourth seed position in the World Cup (Sydney being the last tournament to affect the rankings). Russia won the game after being in charge for most of the game, and despite a late US comeback.

Finally, Canada were too strong for France, despite the French leading early on, the second half in particular belonging to the Canadians.

The resulting semi-finals were one-sided affairs, Australia beating Russia 31-0, and the Ferns beating Canada by just one try less.

Elsewhere England made up for the disappointment of Day 1 with the Challenge trophy, a Jess Breach hat-trick finally ending Fijian resistance after they had stayed in touch with England until the final four minutes.

Spain also had a good day, despite the loss to Australia, beating USA 24-19 to face France in an all-European 5th place game – and a repeating the pool game won by France 22-0. Spain have had a much better series so far this year than last – relegation seems unlikely to be a concern this time around as they will finish Sydney as comfortably Europe’s third ranked team, ahead of both England and Ireland

Relegation will be a major concern for Japan, however, with a 11th place here following their 12th in Dubai – the difference being that the guest team in Sydney (Papua New Guinea) were not of the standard of South Africa in Dubai. With only five rounds this year, Japan are surely already in the Last Chance saloon, two points behind Fiji and seven behind Ireland and England.