Time is running out for Europe. After this weekend’s Sydney 7s we will be halfway through this season’s World Series and a good performance from one of Europe’s leading teams is essential if they are to break into the top four. 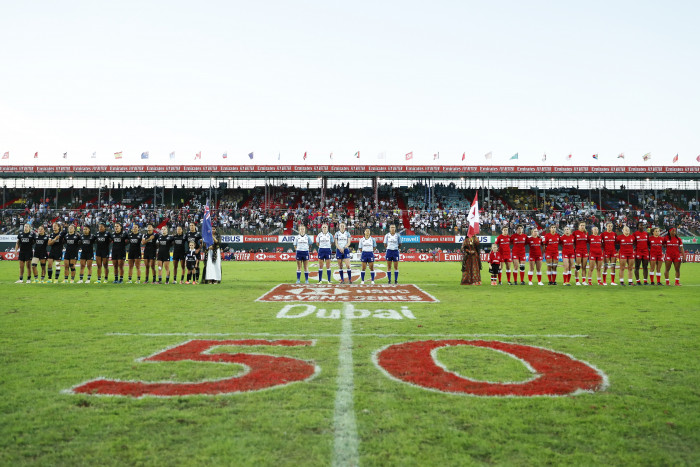 Canada and New Zealand line up for the final in Dubai. One of Europe's teams needs to be there in Sydney.

This year’s World Series is all about Olympic qualification. The top four qualify automatically, after which there will be once place left for each region, and then one final place from the world repecharge.

For half of the World Series teams this is almost academic. It would be remarkable if Australia and New Zealand did not finish in the top four, leaving Fiji to qualify via Oceania. Similarly, Canada are invariably a top four team, leaving the United States with a simple route via the North American qualifier (if necessary). And with Japan automatic qualifiers, China will be clear favourites for the Asian spot.

But for Europe’s five teams all that is certain is that at least one will be missing in Tokyo, and potentially it could be more. A calendar clash with the Six Nations just makes things even more complicated.

Four years ago, France and England were battling for that fourth spot with England stealing it at the death in Amsterdam. France then won the Euros, and Spain took the repecharge as Russia froze in the final - Ireland were not a World Series team at the time.

But as we arrive in Sydney, Europe’s best placed team – France – is already six points adrift of the fourth qualification spot, with the continent’s teams all grouped between fifth and ninth. France’s fourth place in Glendale is the best the continent has achieved so far, and unless one of them (and realistically that probably means France or Russia) does much better – and that effectively means making the final – some well-paid coaches and well-funded programmes are going to have some difficult questions to answer come August.

That would almost inevitably include big funding cuts for some, particularly for Spain or Russia. Four years ago, it was the Dutch whose journey came to a premature end with an outcome that saw them tumble into the second tier of European rugby – a fall that they are only now beginning to reverse.

To make it even more difficult, inevitably some of Europe’s teams are up against each other in the pool stages, potentially knocking lumps off each other while the United States sail through the middle.

England and France should make the quarters from Pool A but the loser will face an absolute must-win quarter (or it's “concentrate on the Euros”) against probably New Zealand or Canada. Russia and Ireland face a similar problem in Pool B – though with the added threat of overcoming the unpredictable Fijians as well. For Spain in Pool C the gap is already such that the Europeans and repecharge are the only realistic Olympic route and their main World Series concern is avoiding relegation. They have to beat China and hope they can maybe steal something off the United States or Australia.

For the rest of the world things are much simpler and it is interesting that China are already using the World Series as a means to gain experience, with nine of the Challenge Trophy-winning team from Dubai being left behind in a squad for Hamilton and Sydney that included only three players with experience outside Asia.

Other teams are difficult to gauge, not least because most squad details are only now released 24 hours before the tournament. Even so, New Zealand will take a massive bounce from their Hamilton performance and will start off as massive favourites. Australia will have home “advantage” (which in can cut both ways), but in practice success may depend on how their injury list looks after this weekend’s training camp – it’s been a tough year and their luck is long overdue a change for the better.

Similar considerations apply to Canada and the United States, who have yet to miss a semi-final so far. They are the teams Europe must beat, but at the moment they hold all the cards.

Up until now, for the European teams an early departure has been unfortunate. From here on it is much worse than that. One of the European teams has to come good, or more than one of them will be watching the Olympics from home, dreaming of what might have been.