The second women’s Sydney Sevens kicked off on Australia Day (Friday 29th January) with a revolutionary new three-day format that it is hoped will become the model for other double-headers on the circuit. 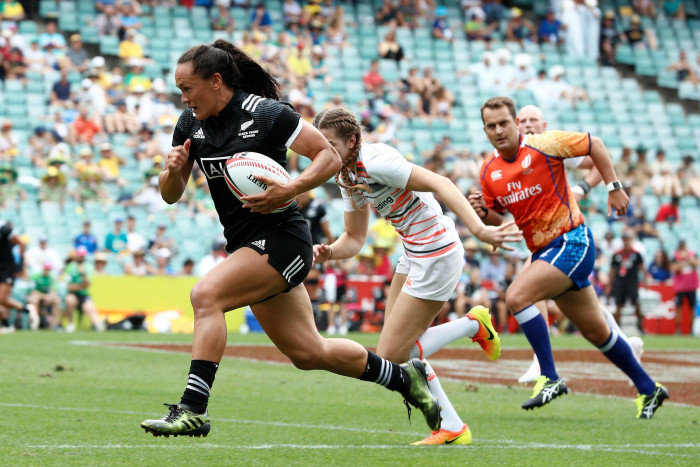 Sydney has been reorganised to ensure that all games take place in the main stadium. The first day saw all of the pool matches for the HSBC Women’s Sevens run alongside the Men’s first round of pool matches. Day two will see the women’s quarter- and semi-finals, with the remaining men’s pool matches, and the final day will see the men’s knockouts and the finals of both tournaments.

The opening round of games largely went to seeding, although Ireland competed strongly with Russia (going down 19-7), and Fiji looked much brighter against Canada than they had done in Dubai, though still lost by 24-12.

The exception was the USA v England – which always looked the highlight of the first round, and proved to be. And it was a close one with the lead changing hands several times. However Jess Breach, making her 7s debut for England, looked born to the format, her speed helping England extend their lead in the second half, which they maintained despite a strong American comeback – a comeback that was to prove crucial later one, despite England winning 28-24.

Round two all went with seeding, though again Fiji and Ireland impressed, the former pushing Russia to a single try win (19-12), and the latter holding Canada to 24-12. The tie of the round saw New Zealand win a tough encounter with England 33-12.

And so to the final round, with plenty still to play for. In Pool C a terrific battle between Fiji and Ireland saw the latter just shave it by 17-14 – a win that was enough to see them into the final 8, but was tough on Fiji who still dropped into the challenge despite their much-improved performance.

But the biggest surprise of the day was in Pool B where Japan – who had been well beaten by both the USA and New Zealand - beat England 17-12. A win would have seen England comfortably into the quarters, but the loss was enough for USA to leapfrog them into second place in the pool.

England still held third in Pool B with a -24 point difference – but Spain could pip them to the final quarter-final spot if they beat Papua by 27 points or more in the next game. This the Spanish accomplished – but only just, winning 29-0. Australia ended the day with a third win – and not a single point conceded.

One of their stars on the day, Emma Sykes, said, “I was so focused on the matches that I almost forget it was Australia Day. We started slowly against Spain first up but we finished the match strongly, the girls were really sharp, and we continued that form into the other two matches. “

New Zealand look their biggest threat on Day 2 with Portia Woodman scoring 10 tries including a hat-trick in all three of her team’s matches to take her all-time series hat-trick tally to an amazing 11.

“Can’t say I have done that before as I am not keeping count but it shows how strong the girls are going as I am seeing a lot of the ball,” said Woodman.“It’s still only day one and we had a game plan to make all our up front tackles and commit on defence. So we are happy but this happened in Dubai, we beat USA in pool play but day two came and we lost to them. Day two is a different story and we need to play just was well tomorrow.”