We pick out our team of the women's 6 Nations in 2014 and our overall player of the tournament. 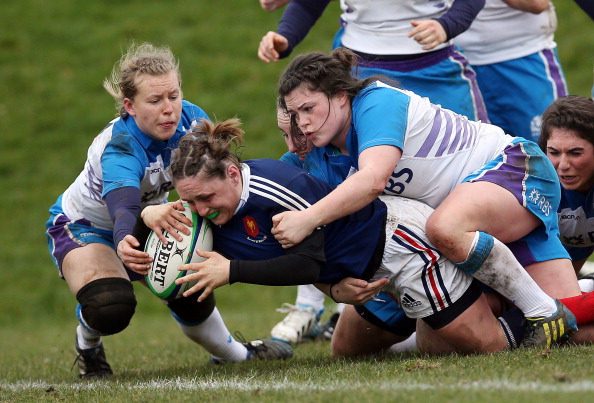 Player of the Tournament
Gaelle Mignot (pictured) The French hooker and stand-in captain wears her heart on her sleeve and often lets emotion get the better of her – not this year. Mignot was inspirational in the French front row and her passion and lead-by-example attitude was a huge part of her side’s success.

Scrumqueens.com Team of the Six Nations 2014

Plenty of excellent players miss out in our team, such was the talent to choose from this season. Scotland are not represented below but Steph Johnson is one who is unlucky to miss out having come of age in difficult circumstances this year and there were others who can consider themselves very unlucky not to be named. For France Marjorie Mayans and Shannon Izar just miss out after a great season in midfield for the champions. England's Tamara Taylor and Katy McLean were also in the mix while Ireland's Sophie Spence, Niamh Briggs and Claire Molloy were also considered. For Italy Manuela Furlan has been prominent as has Ilaria Arigetti and Wales have some stellar backrow talent just edged out.

1 Catrin Edwards (Wales)
A destructive scrummager and excellent broken play runner, Edwards is at the heart of the Welsh pack.
2 Gaelle Mignot (France)
Having led her side to a first title since 2005, the passionate hooker played a massive role a dominant French forward effort.
3 Elodie Portaries (France)
The cornerstone of the French pack which was far too strong for all before them this season.
4 Assa Koita (France)
Another of the French forwards to impress this year – Koita played a key role in the engine room.
5 Jo McGilchrist (England)
A rangy runner, she finished the tournament off with a great display in Italy and her all round athleticism is always impressive.
6 Coumba Tombe Diallo (France)
Part of a fantastic French backrow, is quietly effective on the floor and good with the ball in hand.
7 Maggie Alphonsi (England)
Her return to the game is a boost to England and she was hugely effective again – she’ll get better and better before the World Cup.
8 Safi N'Dyiae (France)
A tough choice at 8 where many players impressed, but N’Dyiae is a wrecking ball and her carrying was a huge asset.
9 Sara Barratin (Italy)
Amid lots of contenders for this position,. Barratin’s zippy pass and pace off the mark really impressed this season.
10 Sandrine Agricole (France)
The experienced French back is retiring at the end of the season and she was a huge figure in this 6 Nations revival.
11 Marion Lievre (France)
A deadly finisher, she provided huge cutting edge out wide this season – will be hugely important at the World Cup.
12 Rachael Burford (England)
One of the best distributors in the game, Burford edges out strong contenders from the French midfield after another excellent tournament.
13 Lynne Cantwell (Ireland)
Another who is retiring at the end of the World Cup, Cantwell’s fast feet and vision always provides Ireland with vital attacking nous in midfield.
14 Alison Miller (Ireland)
A powerful runner out wide, Miller has taken her 7s form into the 15s game and is one of the best finishers out there.
15 Emily Scarratt (England)
A superb season for Scarratt culminated in two player of the match performances. A deadly finisher and an accomplished boot make her impossible to leave out.