All the team news as it's made for round two of the women's 6 Nations, where Ireland host England, Scotland face Italy and Wales travel to France. 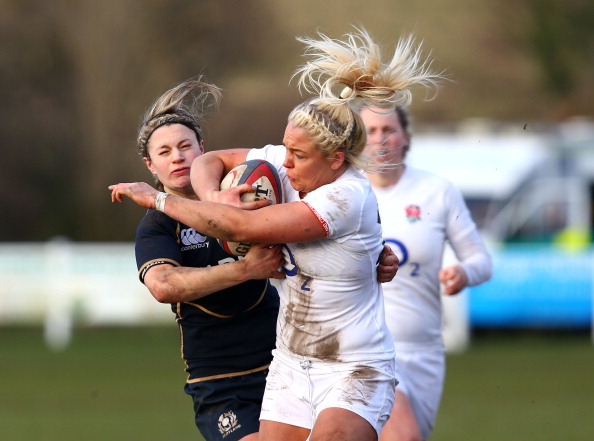 Both teams lost by heartbreakingly narrow scores in round one, and will be desparate to turn their campaigns round this weekend. However, Welsh coach Rhys Edwards was far more positive about his team's performance than Christian Gallonier - though Italy's win over France will have put significant pressure Wales, who are now only ahead of Italy in race for World Cup qualification by points difference.

Wales have made three changes (one positional) to their starting line-up. Captain Rachel Taylor, who has recently returned from injury, drops down to the bench with Nia Davies earning her first start in the back row while full back Rosie Fletcher suffered a shoulder injury in her try scoring performance against Ireland on Sunday at Aberavon. She will be replaced by Caernarfon’s Dyddgu Hywel who along with Davies, earned her first cap against Ireland as a late second half replacement. To accommodate Davies, Vicky Owens switches from the flank to No 8.

France have announced a team with six changes. One is positional, but five are players coming into the starting team. Two of these changes are forced due to injury - Lise Arricastre and Helene Ezanno (the starting props in Rovato) are replaced in the squad by Aurelie Vernhet and Assa Koita, with Vernhet going straight into the starting XV and Koita on the bench, while Elodie Portaries moves from the bench to the front row. Laetitia Grand also swaps with Safi N'Diaye at number eight. In the backs Audrey Parra - who started at fullback last weekend - moves to the bench with Caroline Ladagnous taking the 15 shirt in her place. Her position on the wing is taken by Elodie Guiglion, who comes into the team along with Lucille Godiveau at outside centre, with Elodie Poublan moving to the bench.

Losing both props in Italy is another blow to the French campaign, after having lost talismanic fly-half Aurélie Bailon, in training before last weekend. However, France at home are a different matter entirely to playing away - with a large and vocal crowd being expected.

England make made seven changes, and one positional, from the side that beat Scotland. There is a whole new front row for England with Rochelle Clark and Victoria Fleetwood coming off the bench and Bristol prop Sophie Hemming back in the match day squad. Lock Rowena Burnfield is also back in the second row. In the backs, Kay Wilson moves from the wing to fullback whilst Sally Tuson and La Toya Mason make the starting line-up. Richmond’s Fran Matthew also returns to action  after narrowly missing out on Sevens selection for last weekend’s World Series in Houston because of injury. England coach Gary Street said: “Ireland always raise their game against us so we know this is going to be one of our toughest games of the tournament. It is certainly up there as one of the big games of the championship. That said we will be treating it as just another game, our win over Scotland has given the whole squad a real confidence boost and hopefully if we meet our own expectations then the result will take care of itself.”

Ireland Women's head coach Philip Doyle has made a number of changes to the side for their second Six Nations match against England on Saturday. Nora Stapleton will start at out-half with Lynne Cantwell moving to outside centre alongside Jenny Murphy. Ashleigh Baxter comes in on the right wing with Niamh Kavanagh moving to the replacements bench. The front row and second row remain unchanged but Siobhan Fleming comes in at blindside flanker for Laura Guest.

Match Ticket Info: Gates open at 12.30pm with admission prices as follows: a car of four people is €20, adults and students are €10 and children are €5. The match will be streamed on the IRFU website.

Italy have announced a squad almost unchanged from that which beat France 13-12 in Rovato last weekend - Italy's first win over their oldest rivals since the fixture began nearly 28 years ago. Only two changes have been made, wing Dilette Veronese and flanker Cecilia Zublena being replaced by Giuliana Campanella and Sofia Stefan. Silvia Gaudino again captains her team in a game which could see Italy move above Wales in the battle to qualify directly for the 2014 World Cup. Italy, after last week's results, will start as favourites and have not lost to Scotland since 2009.

For Scotland, head coach Karen Findlay has made minimal changes to the side who played England last Saturday in Esher. Promoted from the bench to make her first start, and gain her second cap, is flanker Jade Konkel, while hooker Nikki McLeod joins the substitutes, her last of four international outings being in 2009 against the Netherlands.

She said: We now have an opportunity on home turf for the team to come out and provide a response in light of last weekend's result. It is now down to the players to find it within themselves to produce a performance, to do themselves and all involved justice for all the genuine, real hard work that has been done and the improvements the team have actually made as a group.

"The time for talking is done.

"Italy have come off the back end of a fantastic win for them against France, so I don't doubt this contest will be a spirited match and, again, a tough one but that's what the players put in all the training effort for.