The women’s rugby sides of Italy and Scotland are both vying to avoid the Wooden Spoon as they go into the final clash of the tournament this Sunday seeking a first win. 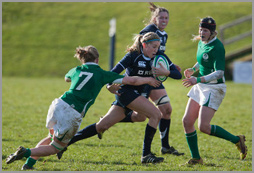 The game in Brescia could also be vital in terms of both sides hopes of qualifying for the 2014 World Cup with points from standings this year going towards qualification.

Scotland go into the game yet to score any points in the tournament but will take some confidence from some good attacking positions they found themselves in against Ireland in the last game. If they can simply be more clinical they can cause Italy plenty of problems.

Similarly Italy have yet to bag a win this year but they have been scoring tries and will be pleased this final game is on home soil even though the Italians did win this fixture comfortably last year.

Italy have lost winger Maria Veronese to injury with Anna Barbanti coming in for her debut while Scotland have also made some changes.

Lisa Martin starts at inside centre with Lisa Ritchie moving to the bench while Tess Forsberg and Ruth Slaven are switched similarly at openside flanker. Flanker Mary Lafaiki returns from injury to complete the substitutes. The match also marks a return journey for full back Steph Johnston who made her debut against Italy away two years ago, when the teams drew.