The RFU English Women's Premiership kicks off this weeked. Check out our team by team preview 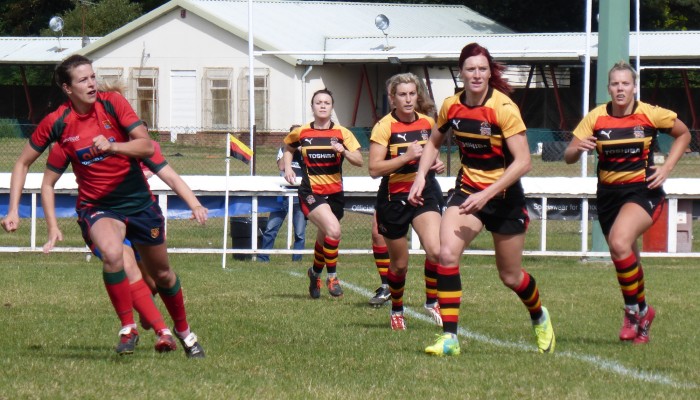 There are two major changes to the Premiership this season.

There will be no automatic relegation or playoff at the end of the 2013-2014 season, which is great news for the newly promoted Aylesford Bulls, who now have effectively a two year programme to work on keeping themselves in the league.

The second major change, that has been welcomed by most Clubs, has been the change to the season structure.

This season, the league will be done and dusted by the end of January, allowing Premierhsip Clubs to play Cup competitions during the 6 Nations window when they are missing most of their international players.

What this adds up to is a jam packed schedule this winter, but an exciting programme of games to come in the upcoming months.

With 19 new players joining their ranks over the summer, Richmond will once again be one of the key threats for the title this season.  Players absent from last season include former Scotland captain Susie Brown, but the squad boasts an impressive array of international talent, which will now include another England winger, Jo Watmore who joins from Worcester.

Head Coach Karen Findlay, who is no longer the Scotland head coach, is focusing entirely on her Club this season and she’s joined by Alex Seghal and Tim Hagon, on the coaching front as well as being assisted by  Amy Turner who is recovering from injury and returning coaches Jack Baird, Mark Francis, and Simon Crabb.  Spencer Lochead and Mike Marsh are new additions to the team.

With three senior teams in three different leagues, Richmond will certainly not be lacking for in depth.

The defending champions will be looking to follow up a fantastic season which culminated in them lifting their first ever Premiership title.  However, it will not be easy.

Departures from last season’s squad include the talented Jo Watmore (pictured), who has moved to London, England fullback Nolli Waterman who has also moved on, while Laura Keates and Heather Fisher are absent for the first part of the season due to surgery and Charlotte Keane is out for the season with a serious knee injury.

There have however been some very positive additions to the squad with Scotland fullback Steph Johnston coming in to fill Waterman’s boots and NZ rugby league international Lisa Campbell has returned to the Club.

After a few seasons of rebuilding, Saracens are looking forward to a stronger campaign this time around. Warm up games against Thurrock and Woodbridge have set the pace for a busy schedule of fixtures.

The Saracens coaching staff has a settled look about it with Ross McClelland and Steve Savory continuing in their roles and they are joined by ex Saracen and club stalwart, Laura Eddie who is assisting.

Saracens had been hit hard over the last few years with retirements of some big names, and the experience that some of their younger players went through last year should stand to them.

The return of Maggie Alphonsi is a massive bonus for Saracens and her leadership could well be vital, while hopes are high that Leanne Riley can continue her impressive progress. Poppy Cleall is another player around whom there is much optimism, while the arrival of Sally Tuson from Bristol is also a plus.

Another massive bonus for Saracens is that they will play some of their home games on the terrific surface at Allianz Park this season.

Wasps have made lots of changes behind the scenes over the summer to their coaching team for their two senior women’s sides, and are looking to reap the benefits in the season ahead.

With the experienced Giselle Mather helping out on the coaching front occasionally, Wasps have also recruited Ty Sterry to head up their coaching team, and his experience in high level Italian rugby is a boost to the squad.

Probably the biggest arrival though is on the playing front, with England star Marlie Packer joining over the summer. One of the standout players in the world over the past 12 months, her arrival is a real bonus for Wasps. Other key players will include Michaela Staniford and Claire Purdy while other new arrivals include Louise Meadows and Gemma Rowland

Wasps are also hoping to improve the fortunes of their second team who were relegated from the Championship last season, to ensure greater quality of their strength in depth, an area they have struggled with in recent seasons.

Newly promoted Aylesford Bulls have the huge comfort of knowing that there is no relegation this season, allowing them to work on a two year plan to stay in the league. It is notoriously difficult for promoted sides to stay up in their first season, as Old Albanians and Thurrock can testify to in the past few years, so this season’s change is a massive plus for the side which includes former England captain Catherine Spencer.

Aylesford have been building for reaching the top of the domestic game since they narrowly avoided relegation in 2009/2010, a turning point which saw them refocus and commit themselves to pushing forward.

A strong recruitment drive and refreshed coaching has seen them go from strength, and they went through last season unbeaten while their second team also gaining promotion and their U18s set up is going well.

New players to look out for this season include Csilla Feher, a 21-year-old fly half from Hungary who has been playing on the European international 7's circuit since she was 17.

She was named Hungarian player of the year 2012 & 2013 and picked up Division 1 European Player of the year 2012. New Zealand born hooker, Laura Levi also joins and the talentd Bernadette Beckles is looking for a new challenge after coming through the USA university system.

The team is supported by the vastly experienced coach Glynn Mitchel as he swaps from his role as 1st XV men’s head coach to the ladies.

Warming up with a pre-season game against Richmond last weekend, Lichfield are hoping to continue their progress this season.

Led ably by England star Emily Scarratt, who is their key player and goal kicker, Lichfield have been boosting numbers for their first and second team, who were all involved last weekend in their warm up match.

Lichfield have kept consistency in their coaching team and retained their link with Bedford Blues with Ben Gulliver and Rich Bennett leading their coaching set up while Luke Baldwin has come in to work on attack and skills.

Also consistent is the squad itself, with relatively few player departures over the summer and Lichfield are particularly excited by the emergence of some of their younger players including Sarah Nicholas, Cat Pugh, Maddy Lockwood and Scarlett Cooper Wall.

The 2013/14 season sees a brand new start for the Sharks in their new home, the Northern Echo Arena in Darlington, and with a number of new faces joining the squad.

The key player for DMP has long been England star Katy McLean and this season she’ll be joined by an emerging half back star with Fi Davidson, who played for England this summer, moving north from Richmond.

Another new arrival is England U20s back Rebecca Scholes and DMP will be hoping to use McLean’s experience to nurture a young and exciting side that also includes Georgina Roberts who will again be an important player for the team this season.

With no major departures, asides for the loss of popular lock Roo Chintoh, Mike Barnett once again heads up the coaching staff at Sharks, his second full season with DMP.

A pre-season campaign began with a development game against local  side Novos Ladies, which was drawn 19-19, and just last weekend saw a hard  fought first team friendly against Waterloo Ladies, with the Sharks looking good  for a 47-5 win.

Sharks will be targeting an improved finish from the 7th placed finish last season.

With two senior squads, Bristol are another Premiership side with plenty of strength in depth. With their second team gaining promotion last season, the quality of that strength and depth will also continue to improve and that will provide a useful boost this season.

It was a good summer for Bristol in terms of representative honours with a raft of players pulling on an England shirt including Kate Newton, Izzy Noel-Smith, Zoe Saynor, Kate Hancock and Amy-Wilson Hardy, who was particularly impressive in the Nations Cup.

The Club also has a percentage of county, divisional and international players at both elite and U20 level and is well placed to continue its progress in the south west.

However there have been a few notable departures and the loss of Marlie Packer (Wasps) who has moved to London, is a definitely blow as will be the absence of Sally Tuson (Saracens) who has also moved to the capital.

But there’s plenty of experience for Bristol to call on, not least from the likes of England prop Sophie Hemming and speedster Kay Wilson. Irish 7s captain Claire Molloy is another key player while a number of Welsh players have also swelled the ranks over the summer with Rebecca de Fillipo and Philippa Tuttiett while another key addition is England fullback Danielle Waterman.

Bristol can also call on an impressive coaching set up with England 7s assistant coach Susie Abbleby leading the team and supported by MMA fighter LJ and Matt Belbin joining from Filton Academy.

Having finished fourth last season, Bristol will have high hopes for the year ahead.

See here for the opening round of fixtures