She used to spend her time perfecting judo throws with Olympic silver medallist Gemma Gibbons, but on Tuesday night teenager Rachel McLachlan will be looking to make turnovers on the rugby field as Scotland host Canada at Scotstoun (7pm). 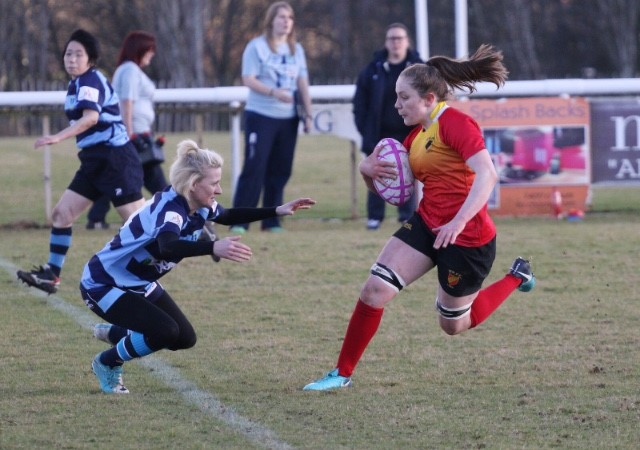 The 19-year-old only took up rugby 14 months ago after 11 years focused on judo and in recent times she has greatly impressed national team head coach Shade Munro with the way she has adapted to her new sport of choice. So much so that, after a competent debut off the bench in the loss in Italy earlier this month, he has handed the Glasgow Caledonian University student the number seven jersey for the visit of the fourth best team in the world.

“She deserves this chance,” Munro said. “She’s been very positive around the camp, she’s certainly a bit of a livewire when it comes to playing the game, she’s aggressive, she’s dynamic, she’s fit and she comes from a judo background which seems to help. Rachel will set the tone for the way we want to play.”

Originally from Edinburgh, McLachlan competed in judo for over a decade and reached a pretty high level before opting to move to rugby. The former Boroughmuir High School pupil said:  “In judo Gemma Gibbons was my biggest inspiration. I saw her at the Olympics in 2012 [where she won a silver in the -78kg women’s event] and that was when I decided that I wanted to get involved in judo competitions.

“And then it was just crazy as eventually I was training with her and that was just such an inspiration. It was really lovely. I went to see a few rugby games when I was younger and I wasn’t that keen on it, but as I’ve grown up I thought ‘that looks really fun’. I started rugby when I joined university in September 2017, so I’m quite new to the game, but a lot of what I did at judo has helped me and I have brought those things into my rugby and I think that’s been a big help.”

McLachlan started her fledgling rugby career with the university team and then joined West of Scotland where things really began to take off for the physiotherapy student.

“I then got into the PDP [Performance Development Programme] with Scottish Rugby in February and since then I have been involved with the full Scotland Sevens team and now the XVs squad,” McLachlan, who now plays for Stirling County, explained. "It’s quite overwhelming. It is mad when I look back on it, but I’m so thankful that I’m in the position I am in now. The first time I played 80 minutes I was shocked. I like physically, handling and stuff, but I found it quite difficult to start with. There is a lot of thinking on your feet and I had to try and learn quite quickly, but I really enjoy the game.

“There’s a lot of differences between the two sports. Obviously if you’re working in a team it’s not just your own performance, you also want to perform well for each other, whereas as an individual it’s just based on you. I definitely really, really enjoy team sports because if you do something wrong you have people around you to pick you up. So far I have played sevens in Paris and XVs against Italy and both of them were really amazing.”

McLachlan is one of two changes to the Scotland starting XV, key No.8 Jade Konkel back after a long-term shoulder injury to win her 33rd cap. Prop Mairi Forsyth and winger Bryony Nelson could debut off the bench too, but the Scots know they need to vastly improve from their 38-0 loss in Calvisano to Italy last time out.

“The players didn’t perform the way that they should have or the way that we trained to perform [in Italy], they kind of just went into their shells and didn’t come back out again,” head coach Munro said. “If we go into the game against Canada with that same mentality, we’re in big trouble. It’s very important that we start the game well.”

Canada make several changes from their game against Wales, including Irene Patrinos starting as full back and Tausani Levale, who earned her first cap on Saturday, starting in the inside centre position. In Patrinos debut against England ‘A’, she went 5-5 on conversion attempts.

The match is live on BBC ALBA and will form part of a celebration of women and girls rugby. Shawlands Academy and Biggar High School go head to head in schools finals at 2pm (under-15s) and 3.30pm (under-18s).