After a gap of just over three years, test rugby returned to the Nordic countries when the recently revived Finnish and Swedish teams met in a friendly in Eerikkilä, Finland, on Saturday. 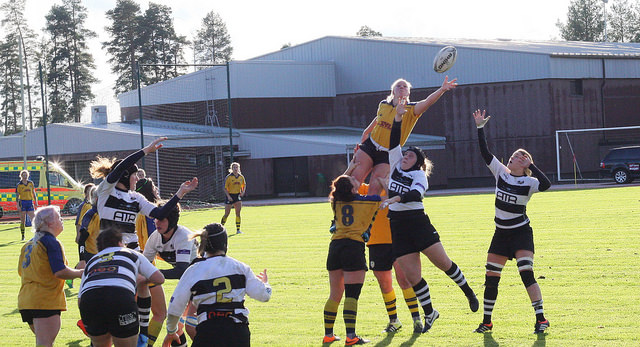 A small but expectant crowd gathered at the Eerikkilä Sports College, about 30km north-west of Helsinki on a bright autumn day for the match.

Finland had most of the possession in the opening exchanges, but made little progress against a well drilled Swedish defence. Then, after four minutes, a solid tackle on Finnish captain Hanna Visuri resulted in the ball being lost forward. Sweden quickly moved the ball to the right and wing Ylva Schwartz sprinted away, outpacing the Finnish defence to open the scoring under the posts. 7-0.

More Finnish pressure took them down to the Swedish line from the restart, but implacable Swedish defence held out. The Finnish forwards showed their power, frequently setting up great attacking opportunities, but the ball rarely made its way to the backs. Sweden, on the other hand, looked far more threatening with the little possession they gained, moving the ball wide quickly and on 19 minutes a near carbon copy of the first try saw them again breakout of defence, the ball worked wide to Schwarz, who passed inside to Minonna Nunstedt, who again sprinted away to score. 14-0.

The speed the Swedish line moved the ball was stretching the Finnish defence, and it was often only handling errors that were stopping the score from mounting still more. But the Finnish team, pulled from side to side, were tiring, and despite errors Sweden were dominating possession, and after 35 minutes – after being held up – drive over from the resulting scrum, Mican Francke-Ryden touching down. 19-0.

Just before halftime, a break by Swedish no 12 Victoria Petersson set up an attack that lead to the fourth try, a second for Nunstedt, to give Sweden a 24-0 lead.

The pattern continued after the restart, with Sweden going straight onto the attack, working the ball wide to Schwartz, who score in the corner. 29-0.

However, after 55m Finland got a break, with Sweden’s Emma Skagerlind yellow carded, and finally got on the scoreboard with Anna Soiluva finding a hole in the Swedish line, racing 70m to score. 5-29.

Bouyed up by that score, Finland briefly took command, but a loose ball and turnover again gave a chance for a Swedish back to show her speed, this time Elizabeth Sonnenholzner who ghosted through the Finnish line to race away to make the score 34-5 to Sweden.

Shortly afterwards Schwartz was again given a chance to show her pace, running around the Finnish defence for her hattrick try. 39-5.

Nonetheless, it was Finland who rounded the game off with the final try, Anna Soiluva intercepting and racing 60m to score just before the end.