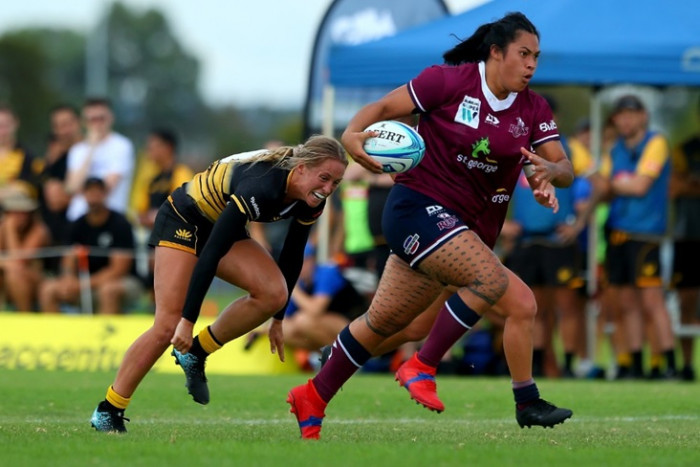 RugbyWA host the Reds in their Super W clash on Saturday in Perth. Photo: RUGBY.com.au

After the first two weekends of the 2020 Super W little seems to have changed. NSW Waratahs and Queensland Reds look very strong, ACT Brumbies appear competitive but unlikely to overturn the top two. Melbourne have improved significantly since last year but they and Western Australia look likely to be competing for the wooden spoon.

Both of the leading teams missed one of the two opening rounds, so the Brumbies lead after two weeks thanks to wins over Rugby WA and Brumbies.

In the opening weekend three tries in the first 20 minutes set the Brumbies up for a comfortable home win against RugbyWA. The visitors revived in the second half but were unable to close in the gap.

A rainy debut was not a problem for the highly regarded 17-year-old Ella Ryan showed confidence beyond her years at flyhalf, while the Brumbies forwards dominated throughout the match, with their scrum proving instrumental in gaining the upper hand on their WA counterparts.

They were ahead after just two minutes with an impressive build-up of phases leading to prop Krystal Fyfe powering her way over the line. Rebecca Smyth, extended the Brumbies lead only six minutes later before a brilliant backline move which culminated in Wallaroo centre Arain Hira Herangi crashing over for a third score.

Brumbies added a penalty soon after the start of the second half. RugbyWA finally got on the board in the 52nd minute but with 10 minutes Brumbies full-time Darcy Read latched onto a cutout pass from Ryan to end the game with a 29-10 win.

The Brumbies second game last weekend was a far closer affair. They travelled to Melbourne and came away with a 25-22 win thanks to a late Sam Wood penalty goal.

The Brumbies against began well, opening up a 14 point lead early in the match before the Rebels fought back. The Brumbies pack was the foundations for victory. The Rebels had opened the scoring with a seventh minute penalty goal in the seventh minute.

But last season’s player of the year, Brumbie Tayla Stanford, back from injury, set up the opening try for the Rebecca Smyth, who shrugged a few tackles and forced her way over the line. After 28 minutes the Brumbles were on top, 17-3 ahead.

A try for the Rebels Nawal Remini narrowed the score to 17-10 at halftime and in the 60th-minute a try from Georgia Cormick levelled the scores. Louise Burrows unconverted try regain the lead for the Brumbies before Rebels centre Ash Walker again tied the score.

Finally a penalty for offside in the 73rd minute was coolly converted by Brumbies fullback Wood and the Brumbies held out for the win somewhat closer than the 63-0 result from last year.

This was the Rebels second defeat, after losing rather more comfortably 33-3 to NSW Waratahs in week one, but again it was a result far better than the 112-0 result in 2019.

The Waratahs notched five tries in their win and were the dominant force the Rebels are a much more competitive team this season without gaping holes in defence that blighted them last year.

Drizzling rain at kick-off caused greasy conditions throughout the match and plenty of dropped ball from both teams but after a scrappy opening five minutes, the Waratahs winger Maya Stewart completed a brace of tries within 10 minutes

However, on 37 minutes the Rebels Georgia Cormick slotted added a penalty to become the first team to score against the Waratahs at home.

The game continued in the same vein in the second half, with the Rebels defence holding firm but the pack unable to deal with the might of the Waratahs front row.

The dominance of the Waratahs pack brought them a penalty try early in the second half. Some desperate defence held them at bay for a while but soon the Rebels pack were again marched backwards and conceded a second penalty try. Finally in the last minute when Stewart notched her hat-trick score, finishing a great team try.

Finally Queensland laid down a marker for a title bid with an 80-5 home win over RugbyWA last weekend. 12 tries saw last year’s runners up dominate from start to finish, with Liz Patu and Maraea Tupai  scoring hat-tricks and Courtney Hodder crossing twice.

Next weekend the Brumbies have the day off – and the Warratahs travel to Ballymore to take on Queensland in what could be a rehearsal for the final.