Tight at the top in English Prem

Just a point seperates Richmond and Saracens at the top of the table in the English Women's Premiership, with the two sides set to play each other this Sunday. They have pulled clear of third placed Bristol, who are now seven points behind. 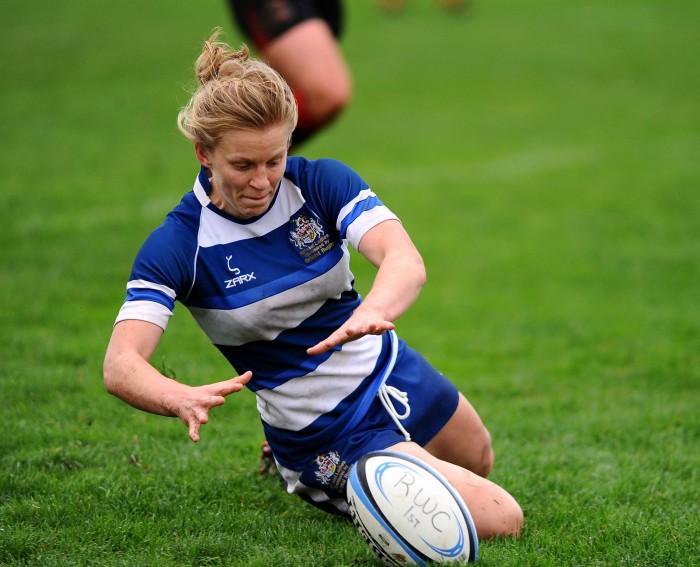 On a wet and blustery afternoon Worcester were well beaten by a determined, well drilled Sarries outfit.

The visitors dominance left Worcester fighting to defend and playing the majority of the game in the in their own half, frequently their own 22.

Saracens surged forward from the opening whistle and it was surprising that it took 13 minutes for them to convert their advantage into points, the excellent Maggie Alphonsi scoring in the corner.

Worcester were given heart nine minutes later when, against the run of play, the ball was worked wide for Kat Merchant to finish with powerful run outpacing the visitors defence to level the scores.

Sarries continued to stamp their superiority on the game and increased their lead in the 29th minute, their dominance rewarded with a penalty try. Lyndsey Wheeler made the only conversion of the afternoon.

A rare indecision from the visitors and an even rarer foray into their half gave Worcester the opportunity to redress the balance, Darel Poole taking advantage with a well struck penalty in the 35th minute.

Any hopes Worcester may have had  in respect of a revival disappeared at the start of the second half when Kat Merchant and Rochelle Clarke were forced out of the game, but some praise has to be given to Clarke’s replacement, Anna MacDonald, who scrummaged well and made several big hits in a very spirited performance.

Worcester’s Head coach, Donna Kennedy introduced herself into the fray for the final minutes of the game and given the extra bite and stability that became evident, could well consider herself for selection next week when the journey to Wasps is likely to provide another big challenge.

For Sarries, replacement Hannah Gallagher crossed the line twice on 57 and 79 minutes and Lindsay Wheeler completed what could have been a route 7 minutes from time.

On a cold, wet afternoon at the Athletic Ground Richmond were first out of the blocks, earning two penalties in quick succession from the Bristol scrum. The first one sailed narrowly wide and the second was taken quickly but turned over. Bristol rarely made it into the Richmond half during the first 15 minutes of play and their defence eventually tired allowing Vicki Cornborough to break through and offload the ball to Jo Watmore who dotted down.

The next 20 minutes were again predominantly Richmond with a few flashes from the Bristol back line, their centre pairing of Amber Reed and Rebecca de Filippo looking especially strong. Bristol's defence was impenetrable with Claire Allan coming tantalisingly close to the line before she was bundled into touch. The crowd had to wait until four minutes before half time for Annabel Sergeant to score. Converted by Alice Richardson it was 12-0 at the break.

The first 20 minutes of the second half saw the tense game continue before Claire Malloy scored for Bristol, then Rowena Burnfield hit back for Richmond, again converted by Richardson, 19-5.

The Richmond backs looked like they might run away with the game again as they had last week against Lichfield, with Jackie Shiels popping up all over the pitch to break the gain line, run a switch or charge down a kick, but they had to settle for one more try with Watmore again taking the credit.

On Saturday night, a bottom of the table clash between Aylesford Bulls and Lichfield saw Lichfield come out on top as they picked up their first win of the season with a convincing 50-0 victory.

The Bulls struggled in the early stages and Lichfield capitalised by scoring two early tries through England No. 8 Sarah Hunter.

South Africa internationals Janine Felix and Charmaine Kayser were solid on their first starts for the Bulls but missed tackles, a couple of turnovers in the vital positions and fly half Florence Williams being sent to the sin bin all contributed to Lichfield running in three more tries through Vicky Fleetwood, Kaz Harris and Emma Garbage.

Going into the break 31-0 down, the second half was much stronger for the Bulls in terms of possession and territory. But after 25 minutes of pressure Lichfield added three more tries through hooker Fleetwood (2) and Emily Braund.

Wasps responded to Sharks’ attacking pressure with some strong attacks of their own with Claire Purdy and Michaela Staniford running well with the ball. Their ball-carrying ability eventually led to a Wasps penalty, which was converted by Hannah Edwards.

Sharks came out firing after the penalty and great attacking vision by Katy McLean and Fiona Davidson set Laybourn away to score her second in the corner. This time McLean nailed the conversion to make the score 12-3 at half time.

The Sharks started the second half as they finished the first. Prop Sally Austen got on the end of a great drive to touch down within the first two minutes. Ruth Nash was next to score for the home team, again from some great work by the Sharks pack, and McLean slotted the conversion to take a 24-3 lead.

Wasps came back at Sharks with a good score from Lou Meadows, but the home side showed their attacking play once again with Suzanne Todd touching down after an impressive flat pass by Mclean. Nash then rounded off a good afternoon for the Sharks with her second try.