Tight at the top in English Premiership

The gap at the top between Saracens and Richmond remains just a point as the English Women’s Premiership contest heats up. Lichfield are up to third. 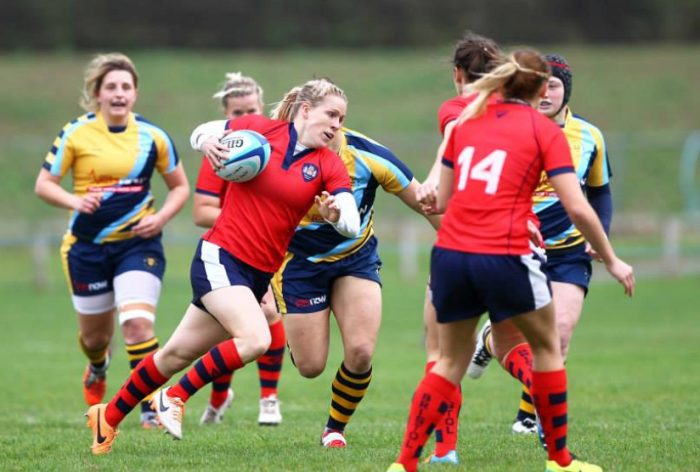 Amid festival of mini rugby Saracens took on Aylesford under floodlights at the Jack Williams Ground.

Bulls started with intensity and put pressure on early doors but it was an all too familiar story when the opposition were allowed their hands on the ball. An early score from Emilie Bydwell and a quick hat trick from full back Zira Handley saw the score at 26-0 on 20 minutes, with Handley also adding three conversions.

Then there was something of a stalemate with 20 minutes of continuity rugby from both sides which though hugely entertaining was no doubt incredibly tiring. Then just on the cusp of halftime winger Charlotte Clappe got the ball in hand and, with a fourth conversion from Handley saw half time score at 33-0.

Two early scores from Lyndsay Wheeler and a fourth from Handley and Saracens are then 43 points to the good after the break.

Again the Bulls fought back, pushing Saracens back into their 22. This time an infringement saw Sarries reduced to 14 men and from an attacking scrum 5 metres out, skipper Catherine Spencer took the ball on, popping it up to wing Georgia Gray, who grabbed the score.

Further scores from Saracens Sarah McKenna, Clappe (2) and Wheeler with conversions from Julie Gilbert had the final score at 69-5.

Worcester battled gamely throughout the 80 minutes of this one but were on the back foot for the majority of the game and had no real answers to the penetrative pace of Bristol’s Nolli Waterman, Mason and Sydney Gregson, who eased past the back three far too often.

The visitors opened the scoring in the eighth minute when a missed tackle allowed Gregson to show her skill and pace, Abbie Brown taking the extras. Worcester’s Naomi Henri was injured in attempt to stop the Bristol score, a double blow for the home side.

On ten minutes Worcester entered the visitors 22 for the first time and powerful work by the forwards was rewarded with a try from Laura Keates, however, the home side then spent the majority of the remaining time in the half defending, mostly an onslaught of Bristol attack which saw Wilson-Hardy, with two tries and a second from Gregson to add to the home sides problems.

On the stroke of half time, Worcester found themselves once more in the opposition 22 and a dominant driving maul was finished by Keates with Ceri Large taking the extras.

The second half followed much of the same pattern, with Gregson complete her hat trick.

The hard working Rochelle Clark repeated the now familiar pattern of a forward try on Worcester’s third visit to the Bristol 22, and at 17 -31, the home side perhaps had some expectation of a comeback. However, a basic error gifted Rachel Taylor Bristol’s 6th try, to put the game out reach for Worcester, but they did finish  with yet another forward try from Rhiannon Watkins.

Richmond started the match sharply and dominated possession in the opening few minutes with Holly Myers scoring a try after a  break from Alice Richardson who found Claire Allan in support before Myers crossed in the corner. Richardson converted.

Wasps then enjoyed a sustained period of pressure, with their pack testing the Richmond defence, however it was not until after the half hour mark that they finally broke through with Alice Sheffield claiming the credit. Hannah Edwards was unable to convert leaving Richmond with a slender 7-5 lead.

Richmond seemed determined to get another score before half time and it was former Wasp Hannah Fields who powered over to take a 12-5 lead at the break.

Richmond started the second half as they finished the first, Rowena Burnfield breaking through to score under the posts and take the lead to 19-5 however the next 20 minutes saw some incredibly even play with neither side giving an inch. Wasps eventually broke the deadlock with prop Bianca Davison scoring after a sustained period of pressure on the Richmond line.

Richmond hit back a few minutes later and were awarded a penalty try leaving them 26-10 ahead and chasing the try bonus point but Wasps were quick to pounce on any mistakes and deny Richmond that elusive fifth score. Wasps had the final word in this bruising encounter with a try in injury time from Sarah Hudson securing them a well deserved losing bonus point

Lichfield are up t third in the table after a good home win at the weekend.

Lichfield took the early lead after a great line breaking run from Amy Cokayne, who ran through unopposed after 14 minutes to score between the posts. Emily Scarratt added the conversion to give Lichfield a 7-0 lead.

Lichfield’s second try after 21 minutes was a superb solo effort from their World Cup star Mo Hunt – she picked up the ball inside her own half and after beating a number of DMP players kicked ahead perfectly, beating two covering defenders to the ball to touch down and make the score 12-0 to the home side.

DMP Sharks started better in the second half, with England captain Katy McLean gaining territory with some excellent kicking. They got their first points on 45 minutes, through a McLean penalty.

Lichfield then enjoyed an excellent spell of possession. Their next try came after 52 minutes, courtesy of a quick pass from Scarratt to full back Sarah Nicholas, who broke through, drew the defence and put the electric winger Jasmine Coyne through to race clear and score under the posts. Scarratt added the conversion to make it 19 – 3.. Two minutes later, another break from the outstanding Emily Braund put Cokayne in for her second try leaving the score at 24-3.

DMP Sharks then put continual pressure on Lichfield, going close on several occasions without scoring. They eventually managed to break the Lichfield line on 62 minutes when following quick passing they scored a try through left wing Jen Lloyd Edwards.