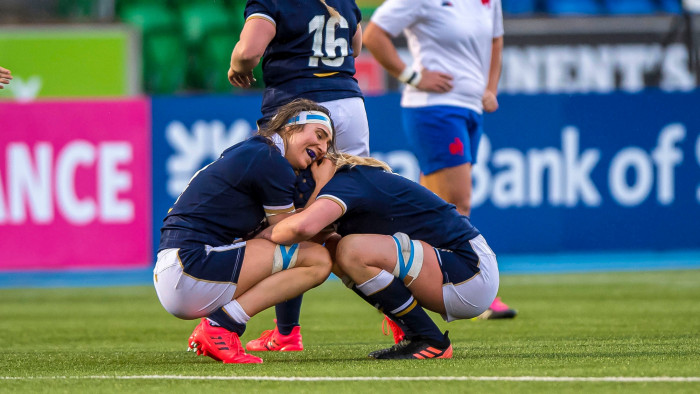 It's been a challenging year for sport but in women's rugby, there have also been some green-shoots, some outstanding matches and some important decisions taken off the field. We pick out 10 such moments, reflecting on the toughest of years.

World Rugby announced a plethora of key changes to the World Cup this year, all of which are welcome and will accelerate the development of the most important competition in the women’s test game.

The expansion of the event from 12 to 16 teams from 2025 onwards has caught the eye most, something World Rugby has wanted to do but has been concerned about the depth outside of the top nations and the likelihood of one-sided scorelines. With a year being lost to develop test rugby this year, that may still be the case in 2025 but it is a significant start to open the game up more globally.

World Rugby also confirmed this year that it will award hosting rights to its next two men’s and women’s Rugby World Cups within the same process so the hosts of the 2025 and 2029 women’s event will be known further in advance than ever before, providing longer-term certainty and maximising the chances of commercial and legacy success.  It’s worth saying that World Rugby faces a genuine challenge in finding hosts for 2025 – the nations who are keen to bid have been hit very hard by the pandemic financially.

Meanwhile the World Cup launch event in New Zealand for next year, featuring the Prime Minister, was the most high profile affair yet in the women’s game, generating real excitement for next year’s event despite the world’s state of flux.

Women’s rugby has always suffered from airing its problems publicly, in part because of low media interest and in part because players have long been too nervous to speak up.  with many fearing reprisals from their own unions or public attention they feel ill-equipped to handle.

Both of those have changed significantly over the past year, with media coverage and interest rocketing and players and advocates speaking up on a variety of issues. Concussion has been a topic of real debate in recent weeks with ex-test players like Kat Merchant and Nic Evans speaking publicly about their fears and concerns and outlets like the BBC and Telegraph running in-depth analysis about the lack of research in sports science for women.

There was also the campaign launched by Florence Williams this year which garnered vocal support from a wide range of women’s rugby players regarding how brands used models to launch kit instead of real players, and we saw players like England captain Sarah Hunter using her profile to campaign to support the challenge of food poverty in the UK.

The expansion of test rugby,  despite the challenges of 2020

After being left behind by sevens for most of the last decade, real evidence of the revival of test rugby was one of the best things to come out of 2020 despite all the challenges the year has brought.

World Rugby’s renewed emphasis on the fifteens game has started to bear fruit, with the final test before the worldwide shutdown being Guatemala vs El Salvador – the first test match ever played in Central America.

Of course, it could have been even better. Tunisia were due to play Algeria just a couple of weeks after lockdown and the Africa Gold Cup has promised to take test rugby to new places, with first test scheduled for Madagascar.

All of that will have to wait until 2021, when we are also promised and expanded European Trophy plus other major new competitions and a global calendar of events making it an exciting prospect for fans of the 15s game.

To our knowledge, England were the only professional women’s 7s team solely being funded by their national governing body, with the rest relying on additional funding and investment from Olympic supporting organisations like Own the Podium in Canada.

The RFU does not receive funding from UK Sport, its equivalent body and its pleas for support fell on deaf ears this year. Nonetheless, even with the huge financial pressures now coming on the RFU, cutting the funding for an Olympic-qualified team in the year before the Games is remarkable. Perhaps there was an element of brinkmanship as the RFU hoped for support from UK Sport, but even so the clear message is that, for the RFU, the Olympics is a low priority, and even perhaps that the focus may be moving away from Sevens as well.

England had already dropped down the World Series rankings even before funding was cut and it is not an exaggeration that, with reduced RFU support, their place in the series could be under threat.

There are sometimes things more important than rugby (honestly!). Signing a petition in favour of democracy may not sound like a brave act – in most countries it isn’t – but Maria Sciakuro, the national captain, will have known the danger it put her in.

News of her arrest leaked out via a German club Maria was associated with, and brought the situation in Belarus to the attention of people who would have been unaware of it. Although she was released after 10 days, Maria is the only national rugby captain, to the best of our knowledge, to be arrested for a political protest.

World Rugby became the first international sports federation in the world to ban transwomen from playing international rugby after saying it  found “at least a 20-30% greater risk” of injury risk factors when a female player is tackled by someone who has gone through male puberty. They released widespread detail of what the decision was based on which you can read in full here.

It was a significant moment in the ongoing debate about transwomen’s inclusion in sport more generally, but specifically in sports with high levels of physical contact.

England’s decision not to apply the rule to its domestic game generated quite a lot of coverage in the aftermath but since then New Zealand, Australia, Canada and the USA have also confirmed that they will not adopt the ban in their community gamem while many other said they will continue to assess the science and consult more widely before coming to a decision.

This presents a problem for World Rugby and reflects the real challenge that this issue is presenting to a sport where the task of balancing fairness, inclusion and safety has proved difficult.

The fact that New Zealand’s statement in response to the ban,  said that physical mismatches have always accepted at international rugby level, suggests that World Rugby have some work to do if they are to persuade countries to follow their lead in their domestic games.

This was not meant to be a list picking out individual matches and player performances, but it seems remiss not to mention two quality matches this year, both of which involved France (look away now French fans)

First the entire England v France 6 Nations opener was brilliant from start to finish. It had everything.  A packed crowd (remember them?), French flair, amazing England defence and an extremely tight scoreline. It ended 13-19 in favour of England, a win that would set them up for a Grand Slam, and you really should relive it and Emily Scarratt’s superb try here with the great Squidge Rugby.

Then to Scotland’s draw with France later on in the tournament. France were in great form, despite the first round loss to England. Scotland had not defeated France for 10 years and no one outside of the squad itself perhaps expected a result. Scotland’s defence was exceptional. Jade Konkel was outstanding and Helen Nelson’s touchline conversion was the icing on the cake. Relive the highlights here.

The worldwide shutdown of international rugby also inadvertently demonstrated how widely women’s rugby is now played. If asked to name two locations that would bookend such an event it is fairly unlikely anyone would come up with Guatemala City and Budapest.

But it was Budapest that saw international rugby first return in August when Hungary, Slovakia and Poland met in a two-day sevens tournament – Poland unsurprisingly coming out on top.

It was a somewhat low-key event, but it was the first light in a depressingly long and dark tunnel.

New Zealand has been the envy of the world this year for how the pandemic has been curtailed within its borders and it’s also meant that its sports programmes have been able to carry on, albeit with some innovations.

The upshot of this is that a year out from the World Cup, the Black Ferns could well be the best prepared team in the world, at an event they already hold the considerable advantage of being at home for.

There’ve been live-on-TV possible v probable games (watch the highlights here) a full-throated Dr Farah Palmer Cup competition with no cancellations or postponements and training camps that are brining players and coaches together regularly.

With no end in sight to restrictions in the countries most likely to challenge them for the title, at this stage they hold all the aces.

March saw a whole new Continent make its debut in the World Cup, when Colombia beat Brazil in Medellin to qualify for the next stage in what is a long road to a possible place in New Zealand next year. But the fact that they are on the road at all is a huge step forward.

In four years’ time these two teams should not be alone. We can be reasonably confident that Argentina will soon join them, which will take us from a single match to a proper tournament, and after that further expansion. It cannot then be long before South America are represented at the World Cup itself.

Best of the rest
Some notable mentions should also go to the fact that there are finally more women’s specific studies being carried out about injuries, such as this major one launched earlier this year; the fact that Wales hired their first Black national head coach, World Rugby’s brilliant coaching intern programme which will see 12 women accelerate their coaching journeys, the continued march of some top class women’s referees and much more! Have you say over on our Twitter account with the tag #bestof2020