Montpellier again shut out their opponents last weekend as the champions roared on. 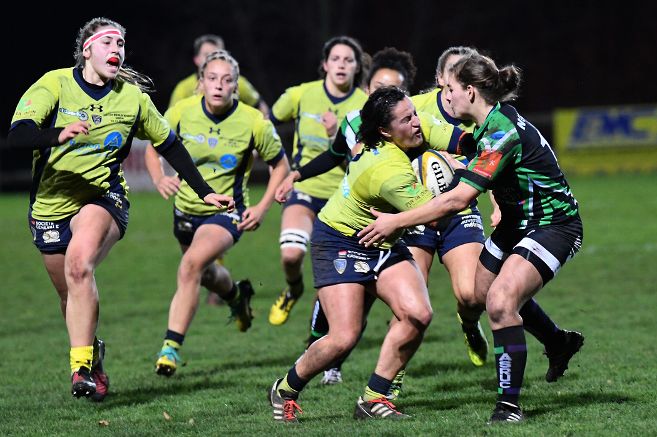 Round eight of the Top 16 in France saw the first return fixture, with games replicating those of the opening round in September. Overall, games that were between last year’s top eight and the newly promoted teams were closer – with one exception.

In Pool 1 champions Montpellier were big 41-7 winners at home to Stade Francais in week one did even better last weekend with a nine-try 53-0 win in Paris. Montpellier have not now conceded a try since the fourth round in mid-October. They scored at a point per minute in the first half, through Gaelle Mignot, Safi N’Diaye, Cyrielle Banet (2), Caroline Boujard and Clotide Flaugere. Things slowed down a little in the second period, but Banet completed her hat-trick while N’Diaye and Boujard scored second tries.

Romangnat beat Rouen 45-0 away on day one, but could only manage 39-0 this weekend, a win that moves them into third – but 12 points behind Blagnac who thumped Rennes 42-5 in an all Top 8 fixture. Finally, Lons could only beat Villelonguet 12-8, giving bottom team in Pool 1 only their second point of the season.

In Pool 2 Bordeaux improved dramatically on their 53-0 opening day loss to Toulouse to only go down 19-0 this weekend, but last year’s beaten finalists remain comfortably top of the pool, unbeaten, with a game in hand.

Although Toulouse controlled the game, breaking down the home defence proved difficult Captain Roxanne Billon was the key in the first half with with two tries, Maélia Lapoujade adding the third early in the second half.

Bobigny nearly matched their 33-0 week one win against Tarbes, winning 31-0 at home.

But it is Bayonne who are in poll position make the play-offs this year as they picked up their seventh win in eight, beating the still rebuilding Lille team 29-3. They now sit just two points behind Toulouse, and eight ahead of Grenoble and Bobigny.

Finally, Grenoble returned to their early season form with an impressive 25-3 win away at Caen