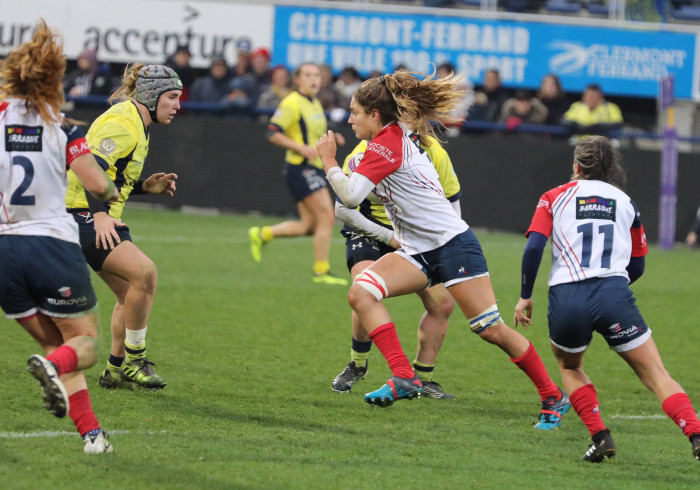 ​Blagnac beat Romagnat in from a a 6100 crowd in Clermont (Photo: ASM Romagnat)

A 12-try 74-0 away win at Villelonguet confirmed that last year’s Top 8 champions Montpellier a place in the new Top 16 playoff next spring. With ten wins out of ten, and nine bonus points, they are now 11 points clear at the top of Poule 1 and 22 points clear of third placed Romagnat. With four games to go when the championship resumes in March, they have the luxury of knowing that they cannot be caught.

Montpellier conceded a try last week against Rennes (they still ran in nine of their own) and you have to go back to October to find a game when they were even slightly pressed. That was away to second-placed Blagnac, and was that team’s only defeat this season. Blagnac are 11 points clear of third place, with a game in hand, and are all but in the play-offs as well, especially after beating their only realistic rivals – Romagnat – in Clermont last weekend.

Played at Stade Michelin in front of an impressive 6,100 spectators – despite the cold and rain. A tight match was scoreless for the first quarter before the visitors broke the deadlock, and extended the lead to 14-3 at the break, only for the Romagnat to roar back and take the lead soon after the restart, only to concede the winning try in the final minutes.

Romagnat trainer, Fabrice Ribeyrolles, was nonetheless pleased with the performance of his team: "We missed that little extra that makes the difference between the semi-finalists and us, and we were hanging in trying to beat them. I'm really proud tonight because we did things right, coming back from 14-3. We thought we were going to win at the end, but even so we can be proud."

In Poule 2 Toulouse are not yet mathematically in the last four, but there are still 11 points clear of Bobigny in third with a game in hand after a 32-0 win in Caen last weekend, and a 50-7 drubbing of second-placed Bayonne the week before. With eight bonus point wins in nine games they have been almost a dominant in their pool as Montpellier have in theirs and anything other than a repeat of last year’s final between the two teams seems, on current form, unlikely.

The race for the final semi-final spot seems the only question still to be answered. Bayonne only lead Bobigny by four points, and the two teams are due to meet in May, although Bayonne remain favourites for the playoffs having only lost to Toulouse so far. They were far too strong for Bordeaux at the weekend, running in eight tries in a 46-3 win. Bobigny meanwhile beat the rebuilding Lille team 31-5, leaving the northerners in sixth place.

Elsewhere in the pool the challenge of Grenoble – the best performing team from outside the Top 8 early in the season – seems to have faded after a 13-0 loss to bottom club Tarbes left them 13 points adrift of a play-off spot.