After another weekend of down-to-the-wire excitement, shared nationwide in live TV coverage, on Saturday 2015/16 champions Lille take on five-time champions Montpellier in the final of the French Championship – the Top 8. And for one key players this could be her last game in her club colours. 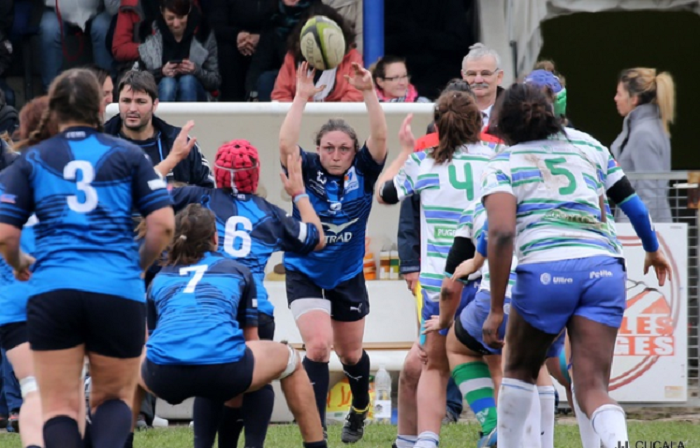 Gaëlle Mignot, captain of France since 2014, may be just about to play her final game for Montpellier – the club she has played for for the past 10 years, during which they have been consistently at top of the French club game with five championship wins and four runner-up spots.

For her club she is much more than the captain and hooker - she is the soul of the team, according to coach Olivier Clessienne. "She does not have status as a professional, but that is only because she does make her living from her sport But she is a professional in her attitude. It is exceptional to have such players."

She is the “captain in good times and bad“, the go-between connecting the coaches to the players in the locker room and on the ground ... And one of the key people in the development of women’s rugby in France.

And on Saturday she leads Montpellier as they take on defending champions Lille at the André-Moga Stadium in Bègles (in the Gironde), aiming to win a sixth title.

But this could also be the end of a Mignot’s career, with just the World Cup to come. At 30 years and after so much effort, Mignot does not know if she will continue after August. She was very emotional on Sunday, after qualifying against Blagnac Saint-Orens by just two points over the two legs (they has lost 17-13, but made the final thanks to their 19-13 win at home the previous week).

"Whether I stop or not, these are rare moments that I may not live again. So I took advantage of it. I am wondering what I will do, but I will postpone these answer until after the World Cup,” she said.

Whatever she decides to do, it seems impossible that she could leave the game behind. "She cannot live without rugby, it's her life," smiles Olivier Clessienne. “She lives rugby, sleeps rugby, coaches young Montpellier teams, leads the pack, and is involved in Provale, the professional players union. The media coverage of our game, the record number of girls who enroll at Montpellier... these are the things she has been responsible for and what I remember most from the last ten years.”

This will be the third time in four years that the two clubs will have contested the final and – despite winning last year – Lille still feel like the young northern upstarts taking on the establishment. When Montpellier were winning their first title 10 years ago, Lille - the Villeneuvoises - were languishing in the lower leagues. They only won promotion to the top division in 2010, for the first time.

Although from a part of France distinctly lacking in rugby culture (in sharp contrast to Montpellier), Lille has a history as the home of the champions of “barette” (a women’s game closely related to rugby) thoughout the 1920s. In more recent years they have benefited from the local university – which lies very close to their usual home ground – and which had been the place where several of their key players have first sampled the game.

They also used sevens as a stepping stone to success – they were national sevens champions even before their promotion, and indeed still are, and regularly contribute more to national sevens squads than fifteens.

Last week they confirmed their place in the final, after topping the table in the regular season, but beating Toulouse 24-17 at home after drawing the first game 19-19.

With his status as the title holder Lille will be start as slight favourites but coach Damien Couvreur, who has been with them throughout their ride to the top, does not get carried away. "Our mindset is good before this final game. We do not have too many gaps in our ranks, but we know that it will be difficult. We still had a nice record against during the regular season but we know what this team is capable of even if we beat them at home. It's really 50/50, but we are determined to keep our shield.".

Stronger than last year, Lille hope to instigate a northern supremacy in women's rugby. "A second title would be historic for the club. It would also be a reward for the work done by girls who are not professional but still train five times a week," adds Couvreur, admiring a team that wants to stay at the top of the game.

The game kicks off at 4pm local time, and will be live on France 4. If you can find a way to watch the game make the most of it – it should be a classic.