After just two weeks the Top 8 already has a familiar look to it. 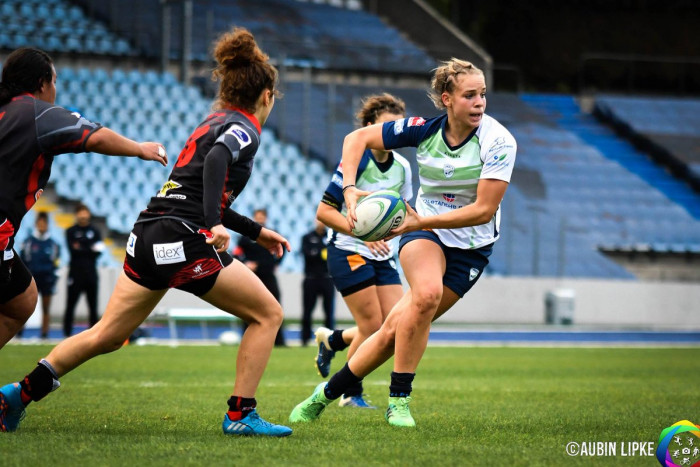 Last year’s finalists occupy the top two spots in the Top 8 after the second weekend, with last season’s beaten semi-finalists third and fourth.

The performances of Scotland’s three full-time professionals at Lille is already pulling in reporters from north of the border, with The Edinburgh Reporter in France to see their first home game against Bobigny 93.

The power of the home pack gained an early advantage, and the first try came after 10 minutes when a loose clearance was collected on the edge of the 22 by centre, Gabrielle Vernier who found a clear run to the line. Chloe Rollie, playing full-back, converted.

Shortly afterwards Lisa Thomson set up another good position, the ball was recycled Vivi Griere, who crashed over, and again was on target.

The power of the pack was crucial with the third try, nearly driving over from a scrum in front of the posts twice, before swinging the ball down the line ultimately into the hands of Thomson who powered over, the in-form Rollie again on target for 21-0.

A brilliant individual try by Cecile Blondiau (again converted) extended the lead still further, and then just before the break Jade Konkel barrelled for a fifth try making it 33-0 at halftime.

Bobigny were a different side in the second half, with two tries from Madouss and Nassira before Romane Menager added a sixth try, Rollie adding her fifth conversion. A late Bobigny try from Madouss closed the gap a little near the end, but Lille were winners 40-17.

Champions Montpellier were in similarly devastating form at home to Romagnat. Five first-half tries from Fantine Baccichet, Morgane Peyronnet, Prune Pegot, Agathe Sochat and Cyrielle Banet put the champions 31-0 up at the break, which quickly grew to 50-0 on the hour as Peyronnet completed at hat-trick either side of a try from Caroline Boujard. With the benches coming into play Emma Couderc was able to finally put Romagnat on the board with 15 minutes to go. Another try for each team followed in the last ten minutes ended Montpellier’s 55-10 triumph.

The other games were rather closer.

"Disappointed, yes, how could we not be? Such commitment, such effort, deserved a completely different outcome" said Rennes coach Vincent Bréhonnet after their single point loss to Blagnac.

For much of the game Rennes looked like they had done just about enough to win. Two evenly matched teams could not be separated until the 67th minute when a penalty try put Rennes on the board. Manon Bigot pulled a try back for Blagnac six minutes later but, as Audrey Abadie had missed the transformation, Rennes maintained their lead. There seemed no way through for Blagnac, until from the final play a drop-goal from Audrey Abadie won the game.

The final game of the weekend saw Toulouse beat newcomers Bayonne 16-7 to move into third above Blagnac,