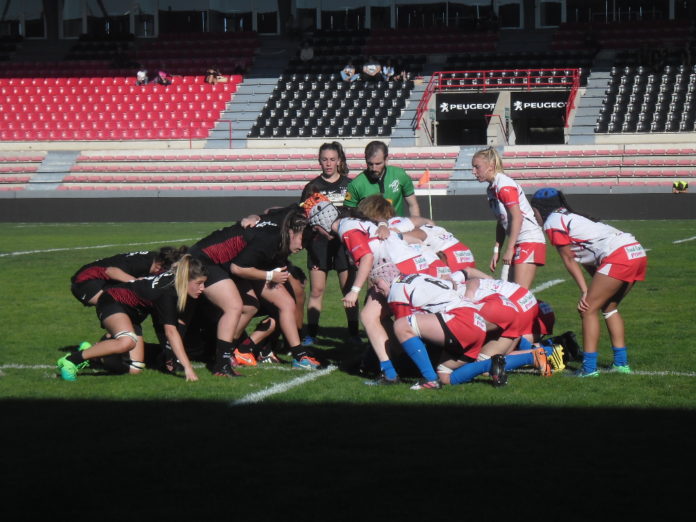 Blagnac and Toulouse met in a classic derby (Photo RugbyAmateur).

Just three weeks in, and it already looks like we have the semi-finalists for the Top 8. Montpellier, Lille and Toulouse are still unbeaten, and Blagnac’s only defeat has been to Toulouse.

That came this weekend at the Stade Ernest-Wallon in a classic derby. The home team gained an early advantage after five minutes with wing Frégier scoring in the corner, brilliantly converted by Imart from the touchline. Although there was a sight breeze in their face, Blagnac seemed overly discomforted, made worse when hooker Bigot was carded after 23 minutes, Toulouse adding a second try three minutes later following some great running by Imart and Majdouline, ended by Cazorla.

Blagnac had a chance to get back only four minutes later, by Abadie’s penalty hit the bar, but from the resulting confusion Blagnac’s pack were able to drive over, and - despite still being a player down – were able to go into the break just 12-10 down when Abadie was on target with her second penalty. Just before the hour Abadie was on target again, putting her team 13-12 ahead. A see-saw battle now ensued, with Toulouse going ahead again with a Hermet try, before Blagnac’s pack put them 20-19 ahead after 71 minutes.

The another missed penalty lead to a try, this time for Toulouse, who were quicker to the ball, which was shipped wide to Boudaud, well converted by Escande – who was on had just before the end to wrap the game up with a penalty, 29-20 the final score.

Top 8 leaders going into the weekend, Lille won again – but left it late. A tight game, Lille lead only 8-7 at halftime, and were 14-13 down with just five minutes to go. But a penalty from Laetitia Estève sneaked them back ahead, before a Lisa Thomson try on the final whistle made the final scoreline look more comfortable than it had been, Lille ending 23-14 winners.

Despite that win, they still lose the lead in the Top 8 to Montpellier, who returned from Paris with a bonus point win over Bobigny. They only lead 10-8 at halftime, but a dominant second half saw three more tries and a 34-15 triumph that puts the “Ladybirds” top – on points difference.

The final game saw the only win so far this season for any team from the bottom four, newly-promoted Bayonne beating Romagnat 19-15.