Defending champions Richmond got off to a rocky start as they were put to the sword by a clinical Lichfield, while there were also wins for Aylesford, Saracens and Bristol in round one of the English women’s Premiership. 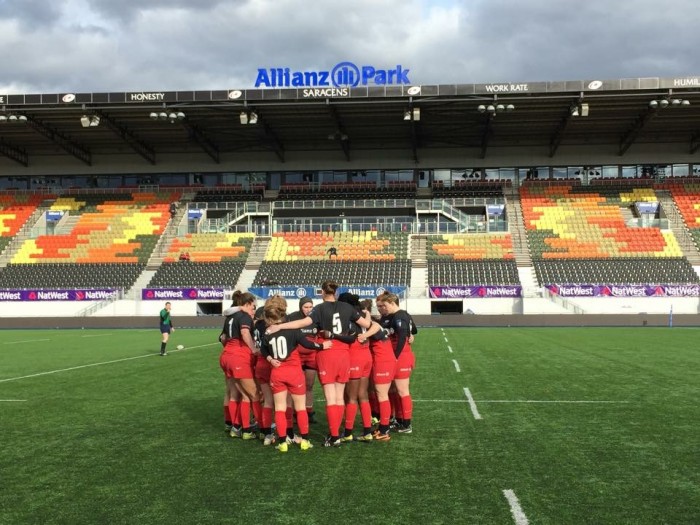 Bristol piled on the pressure from the start of this game however errors in accuracy led to a high penalty count across the first 20 minutes for the visitors and Wasps scored the first points of the day, with kicker Hannah Edwards slotting a penalty over on 14 minutes.

It took fifteen minutes for the next points of the game to be scored – as Amber Reed scored a return penalty to level the score to 3 – 3.

The first and only try of the half came through former Wasp, Marlie Packer, who showed persistence and determination to find a gap in the Wasps defence and cross under the posts. Reed duly converted.

Bristol came out firing and a well-executed line out and led to a 20 metre drive by the forwards, sending Packer over for her second of the game. Minutes later, Izzy Noel Smith showed her strength a powered over, taking the score to 3 – 22.

Cat McNaney was the next to score, scooping the ball up and running it around the back of the Wasps defence while Poppy Leitch followed in her footsteps shortly after adding her name to the tally.

Carrie Roberts thought she has also gone over 10 minutes from the end until the ref blew up for crossing, however she  showed her composure as she dashed through five minutes later for the final score of the game, ending the score on 3 – 39.

Garnet Mackinder bagged a hat trick on her Premiership debut as Saracens saw off DMP Sharks to secure a bonus point win at Allianz Park.  Further tries from Nina Vistisen, Laura Dowsett plus a penalty try helped last season’s Premiership finalists to a convincing 57-0 win getting their league campaign off to a flying start.

DMP Sharks enjoyed a good spell of possession in the early exchanges with solid work from their forward pack earning them a number of penalties and pinning Sarries in their own half. The northern outfit were however unable to capitalise and as the clock ticked on, the home side began to grow in confidence. It took 13 minutes for debutant Mackinder to open her Saracens account with her first try before Sarries were then awarded a penalty try.

Centre Seraphine Okemba was next to get on the scoresheet as she touched down for her first of three tries. Capitalising on another scrum turnover Sarries moved the ball wide and the French flyer demonstrated her power and pace to brush aside the defence. Despite a yellow card for newcomer Charlotte Fredrickson, Saracens showed no sign of slowing down as Okemba crossed for her second

The hosts came out firing picking up from where they left off after the break. Mackinder adding to her tally with a well worked try in the corner. Sarries continued to up the tempo showing their offloading game could prove to be a dangerous weapon this season as the backrow partnership of Lauren Newman and skipper Sonia Green kept the ball alive for Vistisen to score.

DMP continued to fight throughout and strong carries from Ruth Nash and Juliet Short allowed the away side to build the phases.Mackinder sealed her debut hat trick in fine form; a loose pass sniffed out by Saracens with the winger charging through to score.  Not to be outdone in the scoring stakes, Okemba put the burners on to break down the line for her third of the day, calling time on a superb opening performance by the home team.

Three second-half tries were enough to seal victory for Aylesford after a tightly contested first-half.

Early territory and possession showed great promise for the Valkyries when captain Lisa Campbell showed her class running at great line-speed to break the Aylesford defence on several occasions.

However, frustration began to build for Worcester as a dominant thrive of possession down in the Aylesford 22 couldn't be converted into points. Megan Goddard did eventually get the Valkyries off the mark with a penalty towards the halfway point in the first-half.

But Aylesford soon responded when Fiona Pocock dashed 30 metres down the pitch to score the opening try of the game and Jessica Wooden added the extra points with a successful conversion.

Rachel Lund made life difficult for the Bulls defence with darting runs and solid hand-offs. Ceri Large also proved to be influential for the Valkyries in the first-half with a fantastic overall performance. Goddard added her second penalty of the game as Valkyries went in just one point behind at the break.

Early pressure in the second period didn't pay off for the Valkyries as Aylesford put their stamp on the game, scoring two tries within three minutes to stretch the score.

First up Davinia Monteiro crashed over the tryline after a driving maul couldn't be stopped from an Aylesford lineout. The Bulls had the Valkyries pinned back in their own half for the majority of the second-half and capitalised on their dominance with a fourth try as Ellisha Dee went over. Then, a freak bounce of the ball after the Bulls kicked clear went over the head of Alexia Mavroudis and Pocock was on hand to go in under the posts untouched for her second score.

Valkyries surged for a consolation try in the latter stages but couldn't find a way through a resilient Bulls defence.

With upwards of 15 players departing Richmond over the summer, many to join their former head coach Karen Findlay at Aylesford, it was always going to be a difficult feat to repeat their heroics of last season and this result shows just how big a climb it may be. However with some experienced players still to return, there is no need for the west Londoners to panic just yet.

We are awaiting a full match report for this game.