Saracens and Richmond are joint top of the English Women's Premiership though the latter remain ahead on points difference thanks in part to a massive win over Aylesford at the weekend. Saracens edged out Worcester. Elsewhere DMP Sharks picked up their first win of the season over Wasps and Lichfield took out a narrow win over Bristol. 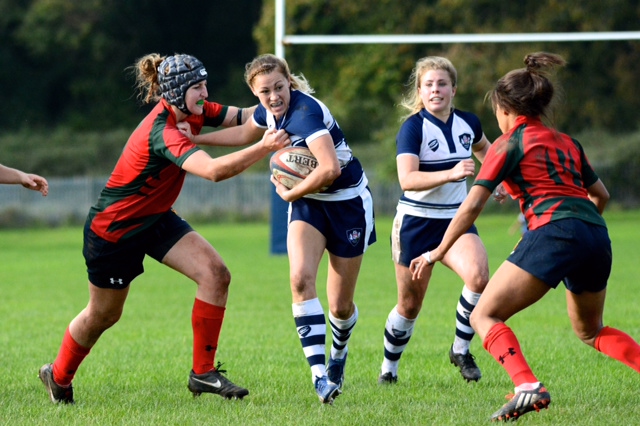 DMP won their first game of the season away to Wasps with a confident victory.

The visitors started the game strongly as a Wasps mistake led to an easy three points for Katy McLean to kick within the first few minutes for the lead which they would not relinquish.

DMP winger Jen Edwards then broke up the right wing to score a try that was easily converted by McLean with the northern side now `10-0 up after just 15 minutes.

Wasps fought back, with breaks from Dalena Dennison and Jane Leonard, yet they were unable to capitalise on these opportunities.

Another penalty was awarded to DMP and despite being on the halfway line, McLean kicked the ball over the posts with ease, adding another three points to the Sharks lead, 13-0.

Minutes before halftime, McLean scored a try continuing a fine individual performance for an 18-0 lead at the break.

Wasps showed more promise in the second half. Defence was tight and kept DMP at bay throughout the next 40 minutes. Fresh legs added to the home side’s advantage, with England U20 player Ruth Dow coming on the pitch and scoring, in only her second game for the side. The try was unconverted, putting the score at 5-18.

More phases of play were put together, though a couple of opportunities were missed for the home side. Their break came from centre, Gemma Rowland, who got over the try line but in the final minutes of the game, DMP crashed over the line with a try from a driven maul.

Lichfield secured a narrow win over Bristol on their trip to the south west at the weekend.

Both teams were evenly matched during the first half, with winger Debs Fleming breaking though the Lichfield defence and storming the length of the pitch to score the first points of the day.  Lichfield responded with a period of pressure in the Bristol 22, finally resulting in a score of their own through prop Becky Williams.

Soon after Sydney Gregson and Claire Molloy teamed up with some fantastic cross field play to send Molloy crashing over the try line, only to have Lichfield level the score just before half time through their fullback before Bristol lost a player to the sin bin.

With the score 10 -10 at half time, Bristol made one substitution, which saw returning World Cup winner Amber Reed replaced with Amy Wilson Hardy - both in Bristol shirts for the first time this season.

Abbie Brown  scored a vital penalty on 54 minutes to take Bristol back in front but Lichfield stepped up the pace for the next 20 minutes and they were rewarded with a try on 71 minutes . Bristol were thrown a lifeline as Lichfield were penalized for not rolling away, however Abbie Brown skewed the penalty slightly wide of the posts.

The last 5 minutes saw the Bristol girls pick up the pace, with solid phases of play and extended periods of pressure in the opposition 22. Unfortunately several inaccuracies and near misses meant the whistle blew at full time, with the score remaining 13 -15.

Saracens edged out Worcester at  Allianz Park on Sunday to remain the undefeated league leaders, though they were pushed all the way by the visitors, who were left frustrated at a number of disallowed tries.

Saracens took the lead early on from a well worked catch and drive from a lineout and Poppy Cleall pushed over. The home side struck again through their strong forward pack to produce an identical score from the driving maul, this time captain Maggie Alphonsi on the end of it. Full back Lauren Cattell added the conversion to take the score to 12-0 in the first quarter.

Worcester managed to keep in touch and this was reinforced on 29 minutes when Bianca Blackburn ended a fluent passing move to reduce the deficit. Speedy Saracens winger, Zira Handley tried to turn the corner before half time however was cut down by the equally pacey, Lydia Thompson in a try saving tackle. The home side had the opportunity to extend their lead after being awarded a penalty, however Cattell pushed it wide leaving the score 12-5 at the break.

The rest of the first half saw Worcester have a few tries  disallowed so expectations for taking the scalp of the season so far stayed in place at the break.

The visitors hit back with a strong scrummage which lead Laura Keates making the score 17 -10. Megan Goddard took the extras from wide out, game certainly on at 17 -12 with 30 minutes still to play.

Worcester felt they had reduced the deficit further on 70 minutes, Ceri Large delayed a superb pass for Kelly Smith to run 20 meters and dive over the line, alas, no try given again.

Sarries were awarded a further try to lock Heather Stammers which pushed the lead out to 24 -12.

Worcester continued to press hard and threw everything at the home side with a try held up over the line on the 75th minute. The visitors had the final say in the dying seconds via some quick thinking from a penalty for Rochelle Clarke to dot over from close range, ending the game 22-17 to Saracens.

Richmond were on top form as they put 15 tries past Aylesford. Fullback Jo Watmore scored 6 while winger Oli Davies added 4.

In their second year in the Premiership, Aylesford suffered one of their toughest days at the office with a hammering at the hands of Richmond who were totally clinical.

The result matched with the difficulties that recently promoted sides have had into the top tier, highlight that something ought to be done to ease the transition into the division, with ex England captain Cath Spencer suggesting recently that the Championship be nationalised to toughen up the standard and better prepare the sides going up.

Whatever happens this game will be one the Bulls want to forget about. Richmond started strongly with a well-placed kick from Alice Richardson giving them a lineout 10m from the  line. Scrumhalf Amy Turner shipped the ball out to Watmore for her first try of the day. Oli Davies scored two more soon after, followed by one for Sam McCarthy before Aylesford got their only try of the day to make it 22-7.

Davies then added her third followed by Becky Essex and Turner to give Richmond a 43-7 lead at halftime, Richardson having kicked four conversions.

The second half started with another quick try from Watmore followed by once for Richardson who converted both. Aylesford then had a sustained period of attack on the Richmond line but the reigning champions showed their class and kept them out. Watmore then continued on her scoring streak with another three tries in quick succession, Jackie Shiels making a welcome return from injury to convert two of them and leave the score at 81-7.

Davies added her 4th try before Claire Allan added a final one to give Richmond a 91-7 win.