Graphics detailing the structure of next summer’s Sevens World Cup have been released – and they reveal a unique and new structure for the tournament. 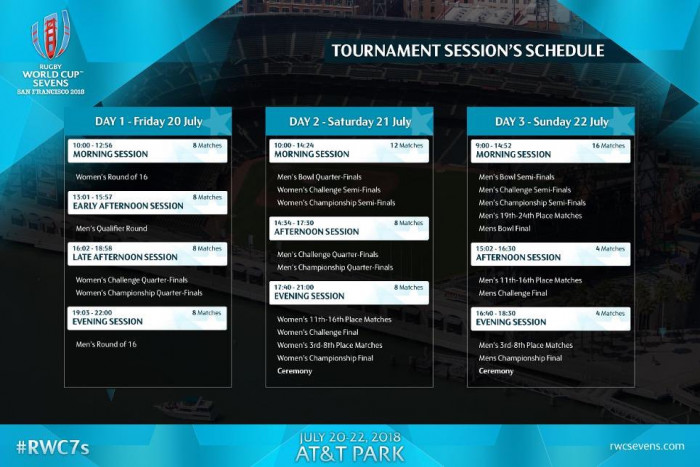 However, in 2014 – with sevens now firmly part of the Rio games – the IRB changed their mind. There would be a Sevens World Cup after all and on 13th May 2015 announced that USA Rugby had won the bid to host the tournament, which would take place in the San Francisco Bay area .

“The magnificent Giants Stadium [AT&T Park] in San Francisco, supported by Avaya Stadium in San Jose” would host the tournament, which would feature 24 men’s teams (playing in six pools of four teams) and 16 women’s team’s (in four pools), with the tournament spread over three days – 20-22 July.

It was quickly pointed out that these stadia were over 46 miles apart (with travel time an hour by road, and two hours by public transport), but there were assurances that the Bay Area Rapid Transit system would solve this problem. However, such confidence seemed to fade after the Olympics –  where getting from Rio to the rugby stadium in Deodoro had proved rather more of a challenge than organisers had anticipated.

So, outwardly for this reason (possibly for others), just over two months ago World Rugby pulled the plug on the 18,000 seat Avaya Stadium, deciding instead to concentrate on the 45,000 seat AT&T Park.

Based on the model of the last World Cup in Moscow, 100 games would need to be played, and as a result it was said that the tournament would now be spread over four days – 25 games per day.

However, in recent weeks there has clearly been another significant rethink, with the addition of an extra day – moreover a Monday – being seen as not viable.

100 games in three days was clearly not possible, and so World Rugby have taken a radical step – and dropped the pool stage.

Instead the 2018 Sevens World Cup will now be a straight knockout – though there will be a full set of challenge series classification games. All teams in the women’s tournament will therefore now play just four games – a “Round of 16”, a Quarter-final (be it Championship or Challenge), a semi-final, and a final or classification game (as in the illustration above).

The women’s event will last just two days and will also kick-off the event on the morning of Friday 20th July with their “Round of 16” (from 10.00am). The quarter-finals will then follow at 4pm in the afternoon.

The semi-final rounds will take place on Saturday morning, while the whole Saturday evening will be devoted to classification games leading up to the final, ending at 9pm.

[NOTE: A new seedings system based entirely on WSWS rankings was announced at the end of November, replacing the one described below]

Seeding for the tournament will be very roughly based on the final standings in the 2017/18 World Series – which means that we can be pretty sure that the five non-WSWS teams – Brazil and the qualifiers from North America, Asia, Oceania and Africa - will be the five guest teams in next year’s World Series (at present there is no confirmation that there will be more than five rounds).

The other four qualifiers from the World Series - Australia, Fiji, Russia and France - will be seeded 5th-8th, again in 2017/18 WSWS order.

Finally the remaining regional qualifiers will be seeded 9th-16th, also in 2017/18 WSWS order.

The implications of this include Spain being seeded no lower than 4th, Australia no higher than 5th, and England no higher than 9th. At present the result of this seems to be to load the top of the draw with - for example - New Zealand playing England or France in the quarter-finals, and Australia in the semi-finals. Certainly England's failure to qualify via the World Series now presents them with a very tough route to success

The draw (with, for illustrative purposes, qualifiers based on their 2016/17 positioning) will be:

The result should be a tournament with few no hiding places, no room for mistakes, and no chance of slow starters building up to the quarter-final places. Resting players will be challenging.

And every spot in next season’s World Series will be battled over like never before.