In the latest round of games in England's top league, Lucy Lomax tells us how Saracens left it late but downed Harlequins to remain safe at top of the table and looks at all the other Round 14 games. 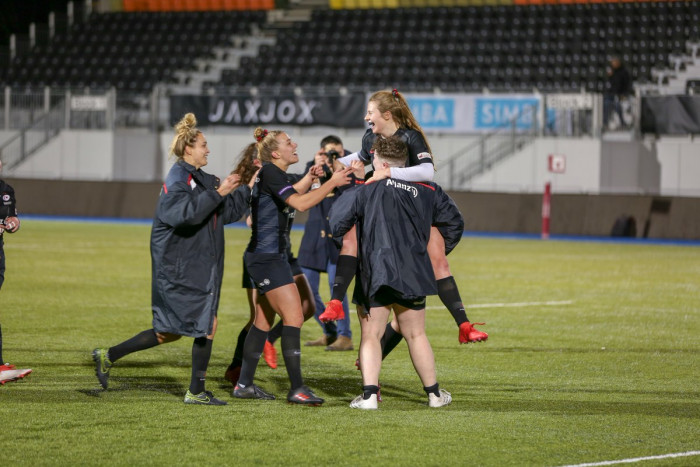 Round 14 of the Premier 15s saw the league blast back in to action after the festive break. With five regular rounds left in the competition before the play-offs, there was much to play for.

The matches started off with Wasps recording a resounding victory over Richmond away at the Athletic Ground. Wasps were targeting maximum points to continue their pursuit of the top three and stay safely within the play-off spots.

In first quarter Richmond got the scoreboard ticking when Jess Wooden touched down with an intercept try and converted to give the home side the lead. The black, red and golds were then punished with quick hands down the left wing to send Wasps fly-half Lizzie Goulden across the white wash before the visitors were awarded a penalty try.

It then got worse for Richmond after they were shown two yellow cards in quick succession, but miraculously due to their defence and work rate, conceded no points whilst they were down to 13.

However, after the half-time break Wasps came out firing and three quick tries, two scored by replacement Garnet Mackinder, put Wasps in control. Richmond replied with a consolation score before Wasps’ replacement hooker Kayinsola Adefemiwa-afilaka got her name on the score sheet, rounding off the scoring for the visitors.

Elsewhere in the capital another London derby was taking place. The show stopping clash of the weekend saw table toppers Saracens down second placed Harlequins at Allianz Park, with Saracens getting revenge for Quins’ narrow victory in round 6’s reverse fixture.

In a remarkable turn of momentum, Saracens scraped the win by scoring three tries in the final five minutes to overturn a 16-point deficit through a penalty try and scores from Sydney Gregson and Hannah Casey.

The result means Saracens sit pretty with a seven-point cushion at the top of the table.

“With 15 minutes to go and 16 points down, it was looking like a pretty dark performance. We weren’t at the races and Quins were deservedly leading, but we got an injection of energy and I think the bench made a real difference.

“We found a bit of belief, a bit of go-forward and got that one score, backed it up with a second score and just put ourselves in the fight.

“By the end, to score in the corner in the last few second, it was about as exciting and nerve-wracking as it gets. It was every emotion wrapped into one, and it’s nice to come out with the points.

“I think the girls showed tremendous character. The performance wasn’t necessarily great, but that last ten minutes showed a lot about us. There was a lot of heart, and ultimately a lot of quality to score those tries against a very good Quins team who pushed us all the way.”

Elsewhere in the league, Gloucester-Hartpury recorded a 27-7 win over bottom team Worcester Valkyries with league leading try-scorer Kelly Smith scoring four to add to her tally this season, bringing her total to 22.

Their bonus point win keeps the pressure on Wasps who currently occupy the fourth and final spot heading towards the play-offs.

On Merseyside, Bristol Bears Women made it back-to-back Premier 15s victories with a 14-0 win against Firwood Waterloo Ladies.

Bears full-back Cat McNaney went over for the opening score with Lucy Attwood converting. In the second half, Attwood touched down herself and added the extras to wrap up the win.

In the final match of the weekend, third-placed Loughborough Lightning got back to winning ways with a dominant 53-14 victory over Darlington Mowden Park Sharks at the Northern Echo Arena.

Wrapping up the bonus point before half-time, England stalwarts Sarah Hunter and Katy Daley-Mclean, both of whom were awarded full-time contracts by the RFU at the start of the year, were instrumental to proceedings with Hunter scoring her side’s fifth try and Daley-Mclean assisting with a cross field kick for her team’s second of the afternoon.

Next week’s fixtures: Round 15