Fly-half Hannah Tyrrell had an exceptional game in the Irish number 10 shirt as Ireland beat Wales 45-0 in Cardiff. 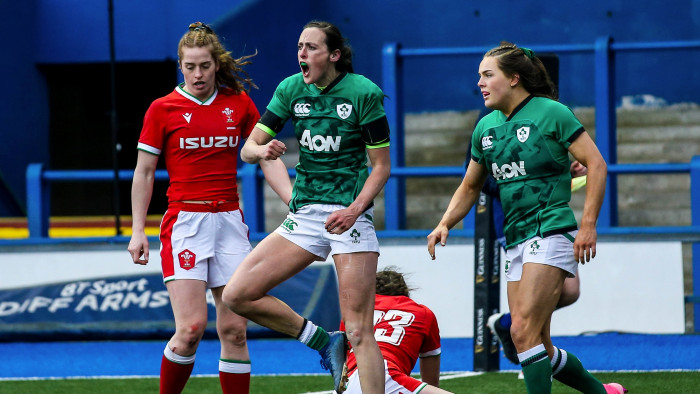 Flyhalf has been something of a problem position for Ireland in recent years, and Tyrrell's assured display - with her game management, kicking and individual attacking all impressive - means Ireland might have found the long-term solution.

Ireland had stars all over the field in a rather one-sided seven-try win, with Beibhinn Parsons a real handful out wide, Eimear Considine playing well at fullback, while Dorothy Wall was strong in a very good all round back-row effort.

Wales were a huge disappointment in the first half as Ireland raced to a 31-0 lead, though defensively they were much better after the break, thwarting several promising Irish attacks with powerful and last-ditch defence.

Captain Siwan Lillicrap was influential once again, and watching her limp from the field will have been a huge disappointment for everyone involved and how Wales will welcome the week off they have from games next weekend.

Ireland scored after just two minutes when Considine dived over after Tyrrell had created the space through a poor Welsh defence.

Parsons then scored two tries in the space of just a few minutes - the first, an outstanding individual effort where the teenager reminded why she is considered one of the most promising young players in the world right now, and the second a great take from an excellent Tyrrell crossfield kick.

Considine then grabbed her second, beating a raft of Welsh defenders and Ireland remarkably led 24-0 after just 20 minutes.

Sene Naoupu crashed over to make it 31-0 lead at half-time.

Like last week, Wales were much better in the second half as though Ireland came in wave after wave of attack, the Welsh defence tightened up and they denied Ireland multiple chances in their 22, winning hard-fought penalties and showing much more intent at the breakdown.

Ireland had to wait till the last ten minutes to score again as a result, with Dorothy Wall showing her power to dive over and then Tyrrell rounded off her fine game with a well-taken indivudal score.

The result sets up a promising Ireland v France game next weekend - to all intents a 'semi-final' now, while Wales will be reeling from two massive defeats.

“At this level conceding 98 points in two weekends and not scoring any tries is pretty painful and we’re all disappointed,” Abrahams said.

“It’s not a great start, and there are some incredible lessons in there, but hopefully it will make us better as a team going forward.

“We’re all pretty disappointed in ourselves - we weren’t good enough today and we started incredibly slow.

“Credit to Ireland they took their opportunities early on, but we’re all very disappointed in the changing room and we all need to review the game critically.

“As a group we’ve all got to step it up and we’ve got to turn it around pretty rapidly.

“I believe in this group, I see the potential we have in this squad and we just need to keep believing. It’ll take time but these tough moments will keep us together as a group.”

"You've got to look at the bigger picture and where we ultimately want to take this programme."

Highlights of the game are available here