England U20 made it two wins from two on their summer tour after a 43-17 win over USA in Wolfville, Canada. 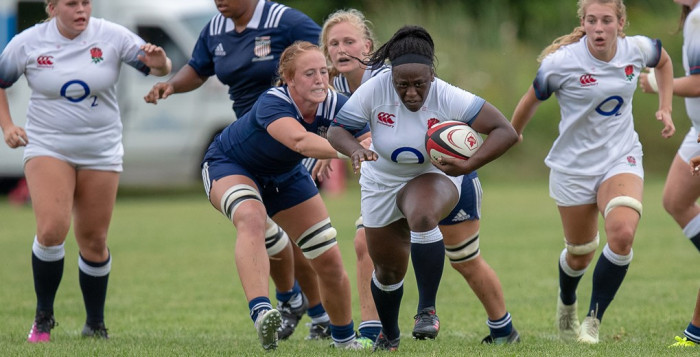 With nine changes made to the starting 15, England were ahead with their first attack of the game inside the first minute as Lilian Stoeger-Goddard went over down the right wing, with Ellie Mulhearn and Sarah Beckett's two scores giving England a 24-17 half-time lead.

A penalty try from a scrum got the scoring going in the second half, with Lucy Attwood and Cara Brincat adding scores as England ran in seven tries overall

It was the perfect start for England after they kept the ball from kick-off and broke down the right hand side, which saw wing Stoeger-Goddard score her second in as many games inside the first minute.

Strong forward play allowed Mulhearn to go over, when a number of pick and drives close to the USA line eventually saw the Bristol Bears Women prop cross from close range.

A powerful break from the American forward Finau Tamaivena got USA back into the game halfway through the first half, before England's forwards, who dominated all afternoon in Wolfville, pushed over from a scrum near the line and No 8 Beckett dotted down - Ellie Green getting her first conversion.

A piece of individual brilliance from USA captain Mata Hingano saw her break downfield before Stoeger-Goddard's recovery tackle was penalised after stopping her from scoring, but Tamaivena crossed the resultant tap penalty.

USA centre Hingano then got her own try to level the game with her burst down the left wing to make the game 17-17, but England were to go in at the break ahead.

It was a controlled, advancing maul which England won a penalty from and after a quick dart towards the line by Connie Powell, the ball was spun to Beckett to cross on the stroke of half-time for her second, which Green added the extras from.

After USA were down to 14 players following the collapse of a scrum, England forwards regrouped and drove again but were stopped from crossing the line as the American pack collapsed and a penalty try awarded.

A superb defensive tackle from Lagi Tuima stopped Tamaivena from getting a third, before England's sixth try arrived with a smart finish from Attwood following a flowing passing move.

Another driving maul laid the platform for the seventh, as Rosie Galliagan took the lineout and a steady drive from 15 metres out saw Brincat dot down off the back as it collapsed over the line with control, and Attwood's extras were the last points of the game.