England beat Canada in their opening match in the Tri-Nations. 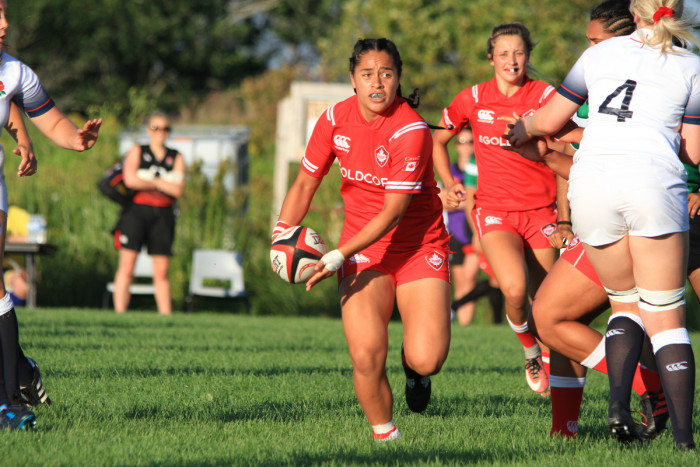 First half scores courtesy of Lagi Tuima, Lilian Stoeger-Goddard, Abigail Dow and Zoe Harrison, as well as six points from the fly-half's boot, handed England a 26-7 lead at the break.

Canada fought back hard in the second half, scoring a three tries and producing individual moments of brilliance, but were denied by further England scores from Harper and Dow. It was a tentative start as both sides jostled for possession and territory in windy conditions, but England's first meaningful attack turned into points, as quick distribution from halfbacks Brooke Bradley and Harrison stretched the Canadian defence until Tuima was found in space to go over.

Harrison's kick made it 7-0. England's lead then increased by a further 12 points, as they scored two tries inside five minutes. Having set up a good attacking platform from a line out, Harrison zipped a well-weighted pass across her back line to Stoeger-Goddard, who duly dived over, before Dow was the recipient of similar skill for the third try. Maddison Gold grabbed one back for Canada, intercepting a Harrison pass and cantering in unopposed from her own five metre line, with the extras reducing the deficit to 12 points. But the momentum was short lived, as Harrison immediately made up for her error, sniping through a gap in the Canadian defence and dotting down under the sticks for the easiest of conversions. England's dominance continued into the second half as flanker Amelia Harper surged over from close range to keep the visitors in the ascendancy, but not to be outdone,

Canada nabbed one back minutes later through outside centre Sarah Maude LaChance. Dow was on hand again for her second of the match before being shown a yellow card. It was a one player advantage the hosts immediately capitalised on, first through number eight Sophie De Goede, then LaChance again. But England held on to record their first win on tour.