Canterbury will meet Waikato in the Dr Falmer Cup final next weekend. 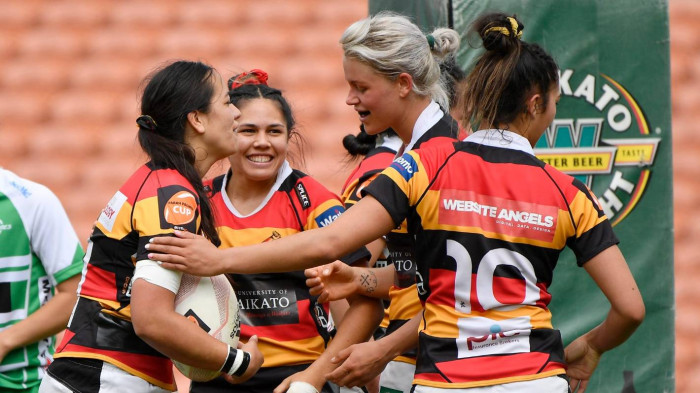 Canterbury, who have won their the last three titles, are one step from making it four from four after a 36-21 win over Auckland while Waikato head for only their second ever final after beating Manawatu 31-14.

It's not wise to turn your back on Canterbury halfback Kendra Cocksedge when there's a penalty awarded but Auckland did and that was enough for her to tap, run and pass to second centre Liv McGoverne to score the opening try eight minutes into the game.

Despite this Auckland were never going to be also-rans and showed how lethal they could be. An orthodox move initially from a lineout saw room created on the left flank where wing Princess Elliot put her speed to use to run in a fine response.

Canterbury made good use of a wealth of possession just before the halftime break to score two quick tries, the first from a goal-line ruck and the second with quick hands giving right-wing – the chance to score in the corner to give the home team a 17-8 halftime advantage.

They backed that with a lightning assault at the start of the second half which saw centre Grace Brooker break through a gap with McGoverne positioned on her inside to score her second try, 52 seconds after the restart. McGoverne completed a hat-trick soon after when Canterbury went down the blindside and scored in the corner.

Auckland got back into it with tries to centre Theresa Fitzpatrick and replacement hooker Saphire Abraham but with the margin at eight points lock Cindy Nelles showed up in midfield and showed her class to break the defensive line and run in a try to knock Auckland's hopes of a recovery.

It has been a great year for Manawatu but that didn't last against the unbeaten Waikato side who claimed the second final spot. Strong running from Chelsea Alley produced the first try, and Tanya Kalounivale, who had a bullocking day with the ball in hand had too much power to score the second try.

Just before halftime Kalounivale produced another key run and when the ball was moved wing Cheyelle Robins-Reti kept her balance when having to reach forward for the ball and then cut back to take Waikato to the break 19-0 up.

Early in the second half, Kalounivale provided the impetus again to set up a try for wing Stacey Fluhler who was given the ball in space allowing her speed to do the rest. Fluhler scored a second when linking with Carla Hohepa who made a superb midfield break.

Manawatu had some consolation for their efforts with two last quarter tries going to replacement back Paige Lush and wing Rangimarie Sturmey.