Three rounds in and the Tyrrells Premier 15s table is starting to take shape with last season’s finalists Saracens and Harlequins leading the way once more. Here’s five things we learned from a scintillating third round of action. 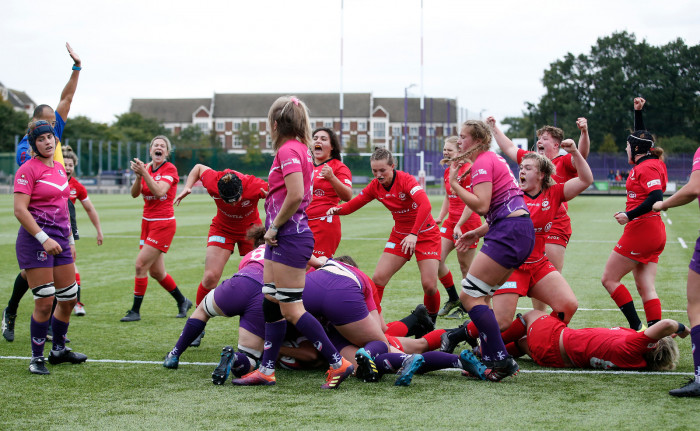 Defending champions Saracens continued their imperious start to the new season, overturning a 17-0 deficit to topple a defiant Loughborough Lightning side - who gave the visitors a staunch test in the Midlands.

Alex Austerberry’s players demonstrated all their Premier 15s credentials once again, delivering a majestic and character-filled second-half performance to edge to a 28-24 victory and break the hosts’ hearts.

It was Libby Lockwood who went over in the final minute to complete what was a remarkable turnaround, showing exactly why Sarries are reigning champions and sending out a statement of intent to the rest of the division.

Harlequins were unfazed by their late kick-off and pressure to match Saracens’ earlier success as they romped to a brilliant 39-12 win over Gloucester-Hartpury – prop Shaunagh Brown spearheading the performance scoring two tries on her return from illness.

Last season’s runners-up drew themselves level on points with the defending champions, notching five tries in total to secure a bonus point and give the visitors – who had also won both their opening two games – a sobering reality check.

It will be a confidence-boosting result for Karen Findlay’s Quins, unerringly brushing aside a team who were just ten points adrift of a semi-final spot in fifth place last season.

Given Sarries’ impressive late comeback at Loughborough, it looks set to be a compelling season as two Premier 15s heavyweights prepare to do battle over the following few months.

Last season’s semi-finalists Wasps may have succumbed to a close-run 22-19 defeat at Gloucester-Hartpury last week, but they bounced back on home soil to ease past Darlington Mowden Sharks 29-14.

Katie Mason, Harriet Millar-Mills, Hannah West and Abby Down all went over for the hosts as they inflicted a second defeat of the season on DMP Sharks – who had stormed to a 46-26 triumph over Firwood Waterloo in round two last week.

It was a polished performance from Giselle Mather’s side, who looked assured in possession and will be looking to go one better than last season’s play-off defeat against eventual champions Saracens.

Worcester Warriors’ Premier 15s misery continued as they went down to a comprehensive 35-8 defeat away to a resurgent Richmond.

The hosts may have been the grateful recipient of a raft of new talent over the summer months, but that will do little to improve the spirits of Worcester who cut a dejected outfit this season.

Warriors had taken an early lead in the capital when Akina Gondwe went over but they capitulated as the game went on to leave director of rugby Roy Davies scratching his head.

If Worcester are serious about not finishing at the foot of the table again this campaign, they will need to conjure up something special – and fast.

Bristol Bears look a rejuvenated side this season as they continued their impressive start with an emphatic 36-0 bonus-point win away at Firwood Waterloo.

A Lucy Attwood double and tries from Becky Hughes, Sarah Bern, Elinor Snowsill and Amy Coles were enough to topple the hapless hosts, who went down to their third consecutive defeat and are yet to register a single point this campaign.

Bristol – who finished sixth in last year’s competition – currently sit fourth in the standings, hungry to qualify for the play-offs they missed out on last term by 16 points.

Should they continue to demonstrate the clinical finishing and defensive resolve they did in Round 3, they will have every chance of doing so.