The USA Women’s Rugby 7s squad will hold a training camp this Friday, on the same day that the International Olympic Committee (IOC) will vote on whether to include rugby 7s as an Olympic sport from 2016. 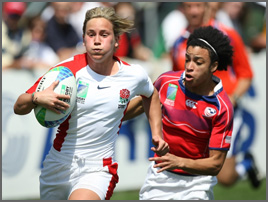 The USA squad will meet at the National Training Center in Clermont and spend the weekend working to impress Sue Parker, the head coach of the womens national 7s team ahead of their participation at the Dubai International 7s in December.

Parker said that the primary purpose of the coming training camp was to teach players how to develop in each of the five areas of mental, physical, technical, tactical, and team development. The players will be assessed in each area at the start of the game and encouraged to develop on these over the weekend.

Under previous head coach Julie McCoy, the USA 7s team finished third in the inaugural IRB Womens Sevens World Cup (pictured in action left) behind Australia and New Zealand and Parker has no doubt that with proper programme development and adequate support, the side could challenge for a gold medal in 2016.

It is the staffs hope that each player will leave camp with a greater understanding of the game of sevens rugby, of their strengths and weaknesses as players, and an individualised developmental programme in each of the key areas, Parker said.