USA women's rugby head coach Pete Steinberg has this week spoken about a change of approach at the top of the game in America to try and help the national side get back to the top of the world standings. 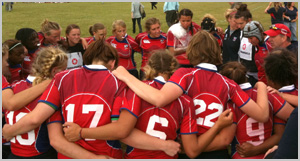 The USA are preparing to tour Europe for a two-test series against France and a game against Italy in November.

Steinberg says the team has turned its focus to getting into the final mix of the top of the world rankings and its XV programme is focusing hard on the 2014 Womens Rugby World Cup (WRWC) in Paris.

The Eagles won the first World Cup in 1991 and made the finals in both 1994 and 1998, but have not placed better than fifth since. However, this years squad vows to return to the winning ways for the coming WRWC.

At the Nations Cup last year we set the goal of making the Final in 2014, said Steinberg.

After the match against England last year the players knew that we can play with the best teams in the world. However, we also learned that we struggle to reproduce our performances in the international tournament environment. The programme has to make sure the players are able to play their best in those environments.

England, another perennial WRWC finalist, fell on the last play of the final game to New Zealand, losing 15-11.

Experiences from the most recent WRWC have altered the way the Eagles plan to develop for its coming contests in Paris. A two-year plan will focus around the goal of having players perform consistently in high-pressure environments.

To initiate the restructured preparations, an Elite Performance Series (EPS) was held in June where the Eagles assembled 75 of the top players from around the country.

While in Colorado, the players were split into 3 teams and played a round robin tournament with the Collegiate All-Americans rounding out the pool. Three games for each team throughout the weeklong camp forced players into the desired high-performance situations.

Our best players can play with the best in the world, but we are not consistent, mentioned Steinberg. Our domestic competition does not stretch them to perform at the highest level.

Steinberg also mentions that the EPS places the players into an international-like environment and a higher level of competition than they typically will see locally.

It is incredibly stressful and challenging for [the players], but that is what happens on tours and at the World Cup, Steinberg stated.

Another additional to the development plan is through having individual skill camps at numerous Eagle Training Centres, located around the country. The individualised sessions encourages players to work on personal development, which enables more team-oriented structure at national assemblies.

Outside of the monthly meetings at the training centers, designated pool players rely on the Eagle 365 website to remain in contact with trainings and individualised development plans.

Next year, recommendations will be made through Eagle 365, where coaches can submit fitness testing scores for players to be invited to an Eagle Training Center to train with current pool players. Players that excel at the training center will then be invited to join the team at an EPS later in the year.

Steinberg notes that the Top 100 EPS of 2013 will be the main driving resource for selecting the World Cup squad.

It will put players into the high pressure environment and place them in a position where they have to perform, which is where we need to compete. There is no-where to hide in this environment, said Steinberg.

The Eagles plan to hold Top 50 EPS several times throughout the next two years as a way of getting players high level games and again putting them in an international-like environment.

Our goal is to provide the players going to the World Cup with more that 25 elite-level games with around 15 test matches and 10 EPS matches, Steinberg said. We believe that this will prepare the players to perform at their best in Paris in 2014.