There were two thrilling games in the Super Series overnight, with England and the USA coming back from significant halftime deficits to win their games v France and Canada on the same 20-18 scoreline. 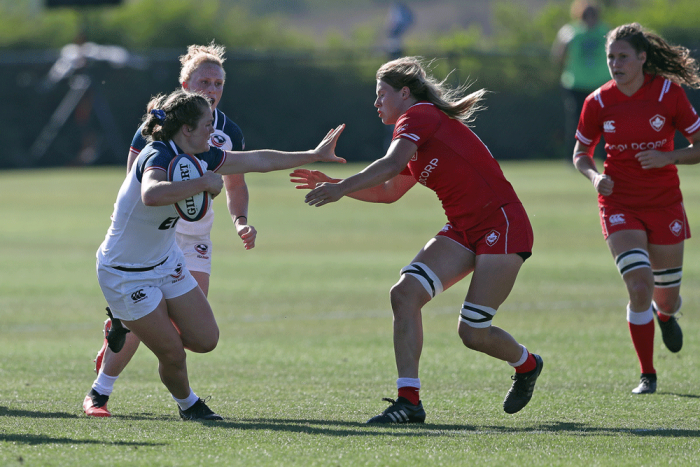 This was am exciting game with a thrilling comeback and though both sides will rue errors and missed opportunities throughout, at this stage in a World Cup cycle both will have taken plenty out of the match.

England, having trailed 18-5 after a poor first half, will be delighted with their spirit and attitude for the second game running, even if they made poor decisions and missed a lot of tackles, while France surely cannot be too disappointed with an 5 day window in which they have beaten New Zealand and almost toppled England.

It was Emily Scarratt’s penalty which made the difference and she had been outstanding for England throughout – contributing all 15 points in the second half comeback.

France were ahead just after a minute when a crossfield kick found Cyrielle Banet for her to dot down, but after Amber Reed had a try disallowed for grounding, from the resultant scrum Kelly Smith took the ball off the back of it and sprinted around the outside to score.

Caroline Boujard’s brilliant run restored France’s lead, as she raced past Lydia Thompson with Jessy Tremouliere converting and then the French full back, and current world player of the year, knocked over two well taken penalties for a 5-18 half-time advantage.

England would score the first points of the second half on 50 minutes as Zoe Harrison’s crossfield kick bounced for Scarratt to drop down for a try.

Scarratt’s second try was from the same combination as Harrison’s high kick was superbly taken out of the air by the centre, and Scarratt wrestled to the ground to score and then added the conversion.

With eight minutes left Scarratt then kicked a central 25-metre penalty as England took the lead for the first time in the match and they closed the game out for their ninth win in 2019.

Captain Sarah Hunter won her 115th cap in the game which puts her one ahead of Jason Leonard and joint second on England’s all-time appearance list with lock Tamara Taylor.

England will now face New Zealand in their final match of the 2019 Super Series on Sunday 14 July, where the tournament moves to San Diego State University’s Torero Stadium for the final round.

Simon Middleton’s side sit three points above New Zealand going into the final game of the tournament on 13 points, with the Black Ferns on 10.

“It was a great Test match and hopefully everyone who watched it appreciated what both sides put into it," said Middleton.

“The character in our team to come back from a tough position we knew we could as we’ve got a lot of belief in being able to close games out – we did it against Canada and we’ve done it again today with some monumental efforts on the field.

This was another high-octane and very watchable comeback game and the first US win over their rivals since 2015. The win also means that the sides are now tied on 19 wins each over other.

It took a massive US defensive effort to win this – with the hosts having to halt three Canadian tries and force a number of key turnovers to secure victory when all had looked lost at halftime.

Like England, USA also conceded 18 points in the first half and were trailing 18-3 at the turnaround.

Canada were on the board early in the 6th minute but powerful running by Fane Haungatau and Alev Kelter allowed the US to make good ground and stay in touch.

Kelter knocked over a 13th minute to put the first US points on the board, after which Canada countered by building a 3-15 lead thanks to two tries from Olivia de Merchant and the additions from the tee from Sophie de Goede.

It was a different story in the second half.  Emily Henrich, who had a fine game, got the US back into it with a much-needed try early on and then Kelter turned the tide of the match midway into the half by beating a quartet of defenders en route to a score that cut the deficit to just three points with her fine finish.

Finally Heinrich’s powerful run helped to put the US into a good position and a lovely kick from Katana Howard saw Kris Thomas outsprint the Canadian defenders to touch down the try and win it for the hosts.

“We have such a deep team - a great bench - and that’s really what solidified our win today, the girls coming off the bench. You can expect a lot of fun.”