In the run-up to the inaugural IRB Women’s Sevens World Series, set to kick off in Dubai in just over one month’s time, the 2012 Guangzhou Zengcheng International Women’s Invitational Rugby Sevens provided three of the participating nations with an ideal warm-up, with the USA finishing victorious. 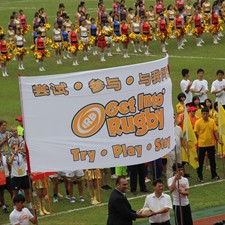 Playing in China, the country that will host the third and penultimate round of the World Series, the USA, South Africa and the hosts all gained valuable game time against other seasoned Asian opposition such as Kazakhstan, and with Chinas second string proving a match for anybody.

Ultimately USA proved too strong, beating an impressive South Africa side in the final after coming through a series of intense and competitive matches.

Were very pleased to win the final, it was a hard final and I think our strength and conditioning came through in the end, said US captain, Deven Owsiany.

It is great to be here," said USA coach, Ric Suggit. "Who would have imagined that we would have played in front of full stadium in China. It's amazing. We have enjoyed the event and the hosts have been fantastic.

The staging of the event is part of Zengcheng Citys ambitious plan to become the first Rugby City in China.

The tournament brought over 18,000 new rugby fans to the Zengcheng KangWei Stadium to watch the opening ceremony and the two days of match action.

"This has been a very pleasing event and it certainly shows what we can produce when we go through the appropriate channels and work with the local Government authorities here in China," said IRB Regional General Manager for Asia, Jarrad Gallagher.

"Zengcheng has become a Rugby City, with bus stops, bill boards, the newspaper and local Zengcheng TV promoting the event and rugby."

The opening Ceremony, the first round of matches, the bronze medal match and the Gold medal match were all broadcast live on Guangdong TV and there was live internet streaming of the all matches.

The tournament also served to introduce the IRB's Get into Rugby mass participation programme, with schools next in line to introduce the initiative. To date, 300 schools have been included in the programme, some of whom took part in the opening ceremony.

The initiative is also being supported by significant changes in rugby facilities in the city. Ground is currently being cleared for a new rugby training facility, expected to open early in 2014, which will include 10 rugby fields, athletes accommodation, sports science, strength and conditioning facilities and equipment.

Furthermore, a new Sports Stadium will be built in Zengcheng to fit with the city's environmentally friendly theme, promoting healthy living, enjoying the natural environment and the special lichi of the city.

Next year will see a similar number of international Rugby events in China, including the third round of the inaugural IRB Womens Sevens World Series in Guangzhou.