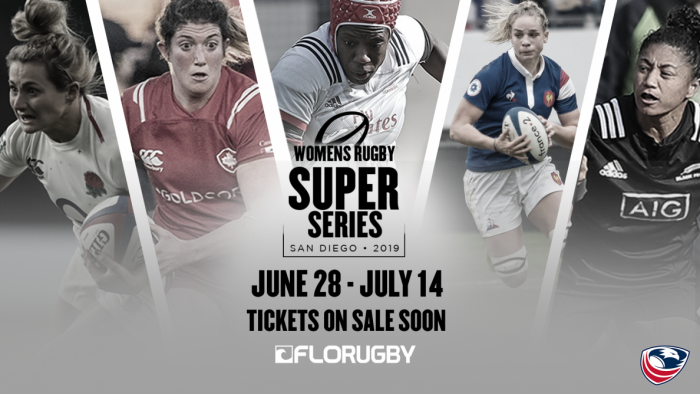 Kicking off for the first time in three years and increasing from four to five teams, the Super Series will feature No. 1 New Zealand, No. 2 England, No. 3 Canada, No.4 France, and No. 5 United States.

The tournament was last hosted by the United States in 2016 where Canada won the title and England claimed runner-up for the second consecutive cycle.

Overall, two games will be played per day on June 28, July 2, July 6, July 10 and July 14 allowing both teams and fans multiple opportunities to experience high level competition. Each team will use one match date as a bye with the first four rounds taking place at the Elite Athlete Training Center -- also the training site for the USA Women’s and Men’s Sevens teams -- and the final round on July 14 happening at Torero Stadium.

USA Rugby General Manager of Women’s High Performance, Emilie Bydwell said: “We are very excited about the opportunity to host the return of the Women’s Super Series.  The timing of the event, duration, number of games and quality of competition aligns with our goals for the Women’s National Team. Further, World Rugby’s support and investment in this competition speaks volumes of their commitment to improving High Performance competition structures and quality of the top-end product of the Women’s Game.  This will arguably be one of the biggest events in women’s rugby in 2019 and having USA as the host will generate a positive impact for our program, players and community.”

World Rugby Chairman Sir Bill Beaumont said: “As part of the women’s strategic plan, accelerating the global development of women in rugby, one of the key strands is to increase competitiveness of international rugby across the women’s game. As part of the plan, World Rugby’s high performance program is committed to providing targeted investment and support in order to achieve this long-term objective.

“The Women’s Rugby Super Series is a fantastic competition that offers more quality playing opportunities and is set to be a thrilling tournament, where we look forward to the top five women’s international 15s teams compete for the Super Series title this summer.”

Match timings and ticket information for the Women’s Rugby Super Series 2019 will be announced in due course. In the meantime, fans can sign up to be included in USA Rugby’s event presale list here. All matches will be broadcast LIVE on FloRugby.com.