USA women's rugby captain Ashley English reflects on a season of solid progress for her team where they finished as Nations Cup runners up. The USA will play Canada twice in January as they build up to the World Cup. 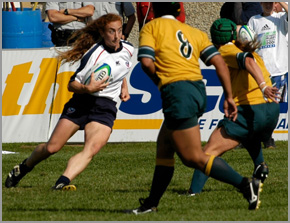 Ashley English is convincing when she talks about how much her USA side have progressed in the last two years. Having started her career for the national team in 2001 as a fullback, she is certainly experienced enough to know when a team is good enough to be competitive at a World Cup, so theres a lot of merit in her belief that the USA will travel to London intent on more than just ruffling some feathers.

Having finished just outside the top four at the 2006 World Cup, the USA squad then lost a number of their most experienced players who decided to retire from the game at that time.

I first captained the USA in 2007 when we played against England, she explained.

At that time we were in rebuilding mode after the 2006 World Cup so we were a very young developing team but we showed potential and we have improved 100% since then.

This years Nations Cup points just to how improved they are with a second placed finish behind England - but ahead of Canada, South Africa and France surpassing all expectations after the side had been struggling to win games in previous outings.

We started the Nations Cup against England and playing England is always a tough test because they are such a great team. I was very proud about how we played in that match even though we lost and I was pleased we had a chance to go back there and play three more games because thats rare for us to play lots of games back to back, English says.

We played South Africa next and it was a real chance for us to work on our offence and we did really well and scored some great tries. The game against Canada was a real nail-biter but as you can imagine we really wanted to win that one. The last game against France was a good experience because a lot of us, including me, had never played against them before so we didnt know what to expect. It was a rainy day and it was a physical game. We played well and managed to get the draw and we then finished second in the tournament.

The second place finish proved a real confidence booster for the side who will again face Canada twice in January for the new Atlantic Cup, and English says that despite playing the Canadians several times every year, there will be much to be gained from the games.

It can be frustrating to play the same side so much but there is a real rivalry between us and we have really gotten to know each other well. We are hoping to play them again in the summer before we go to London so that should be good preparation because they are an excellent team.

Playing Canada so often isnt the only issue for the USA side. The size of the country means that the national players get to meet up far less regularly than other sides at their level.

We have to travel a lot unfortunately and often the players will pay their own airfares to get places though I know our management are doing a lot of work to increase our budget.

English says that her side are working on playing quality rugby for 80 minutes.

"At the Nations Cup we played well for maybe 40 minutes against France and England but we havent been putting together full games where we have been playing well the whole time. If we want to finish in the top four at the World Cup which is our goal then weve got to be able to stay with teams and finesse some of our game.

Many of her national teammates have also been involved in the USA 7s side this year and though she doesnt play much of the short form game herself, she believes that rugby being an Olympic sport can make a real difference in the US.

Im not a big 7s player but as teacher who coaches at high school level I think 7s will be a good way to get kids into the game in the USA. Often parents will say they dont want their young daughters playing rugby for a variety of reasons but if its an Olympic sport that may change. In the US rugby isnt yet a big sport people often get us mixed up with other sports asking things like is that the one with the stick? so we have some way to go yet!

As for the World Cup next year, the USA have been placed in a pool with England, Ireland and Kazakhstan.

And her tip for a side to watch at the tournament?

I think Australia will be a real team to watch out for. We played them at the last World Cup and they were highly skilful. They won the 7s World Cup last year and if those players have transferred well to the 15 aside game then I think they could be a real threat.

If the USA can keep improving at the rate they have this past 12 months then her side too could prove threatening to the title pretenders.