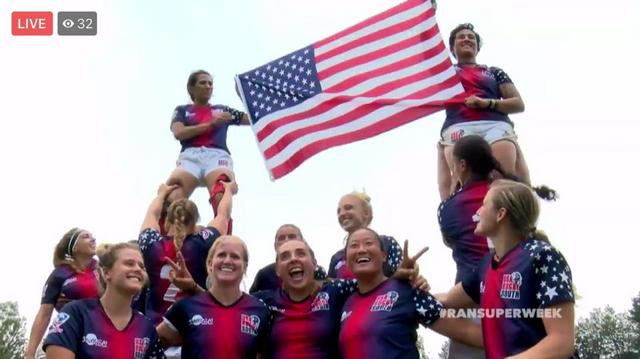 The Caribbean has a long history of test rugby – back to 2001 when Trinidad played Venezuela in a one-off test, and 2003 when the first regional test tournament was organised. But the cost of inter-island travel and the rise of sevens killed test rugby off after 2011. Now this 10s competition aims to be a first step to revive it – 10s having the advantage of not only smaller (and therefore cheaper) squads, but also allowing several matches in a day.

However, the challenge faced by RAN was illustrated before this tournament, in Mexico City, began with defending champions Trinidad & Tobago failing to take part, almost certainly due to the cost. Indeed, only one of the island teams from last year’s competition – Jamaica - managed to make the trip this year.

The only other island team taking part was The Bahamas. Up against the island sides were the hosts, Mexico (weakened a little by the lack of their sevens players, due to the upcoming World Cup), and USA South, who again represented North America.

The matches were again 20 minutes long, with all four-team playing in a single pool, with the top two playing off in the final.

Apart from the opening game, where USA South easily beat The Bahamas 48-0, the pool games on the opening day were close and it is perhaps unfortunate that what always looked to be an effective semi-final (Jamaica v Mexico) should be the second match of the tournament. Jamaica, physically larger than their Mexican opponents, benefited from an early try from scrumhalf Shawna Kade Douglas but Mexican handling and speed was a problem and tries just before break put the home team into a 14-7 lead at halftime. Jamaica pulled to within two points with five minutes to go, but Mexico seemed in control until a very atypical handling in the final minute gave Jamaica an opportunity to grab the game, which they took, prop Kimbeley Coombes showing speed and power to crash through to steal the game.

With USA South and Jamaica winning their second games on the opening day, the final round of pool games on day two were effectively dress rehearsals for the final.

Mexico beat The Bahamas by almost identical scores in both games – 24-0 and 26-0 – but the final between USA South and Jamaica was far close than the pool result (41-5) suggested.

In the final USA South took the lead midway through the first half, but two tries in the final minute of the half meant that Jamaica went into the break 12-5 ahead thanks to tries from Shanique Smith and captain Sasha-Gaye Green.

It was a lead Jamaica held until two minutes from the end, before constant American pressure finally produced results, tries from Freeman and captain Tiara Lyston getting the scores to win the title 19-12.

Captain of Jamaica Sasha Gaye Green said “despite the loss, I am pleased with our run and hopes their it will inspire more women in Jamaica to play rugby”.