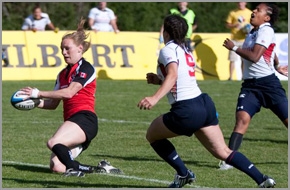 Meghan Mutrie brings us all the reaction from Canadas win over the USA. We hear from the head coaches as well as standout players Phaidra Knight and Heather Moyse.

You mentioned you were nervous, but how does it compare to the Olympics?

"I don't know if you can compare this game to the Olympics. It's two totally different sports and you prepare totally differently. With the Olympics, youre going to let yourself down and I guess the entire country! if you dont do well. But here its more about a team of girls who have put their faith in me coming back and that was the biggest reason why I was anxious and most nervous coming back in this game.

Im not where I want to be come World Cup. Ive only been back training for a month now. Im still on the incline and I was really worried I wasnt in a place where I could give the team everything I wanted or I would let them down.

What was the best part of this game for you personally?

It feels good to be back with the girls. Two years away from the team is a long time. It feels good to get those first-game nerves out of my system and now I can just concentrate and play rugby because I love it instead of worrying about all of the other things that are surrounding it

Which areas of the game will you look to improve for next match?

Our basic areas are making sure we keep that basic ball clean at the breakdown and its just our handling errors. We let the ball hang around the ruck and played into their hands and we spilled the ball a little bit too much. Maybe its because its the first time weve been together in a while, but its international rugby so we have to make sure we get that in and make sure that ball sticks.

Will you look to move it out to the backs more because you know the US are good in tight?

Our whole intention was to speed the ruck up and get that ball away so we could attack. When you cant get the ball away from the ruck for one reason or another its always going to be difficult to get the backs good quick ball and thats what were trying to achieve, so yeah, disappointing, but a win is a win.

What do you expect from the Americans come the next match?

The USA will play the same sort of way. We know each other so well. Theyre pretty much where we were in terms of our handling errors and it created a stop-start game. Theyll work on it, well work on it, and well see how well it works on Friday.

They were on the 5m line do you think you escaped because of luck, their mistakes or your defense?

Weve been working on our defense pretty hard, and the girls have shown how good they are in defense. Thats been something weve tried to work on bit by bit and the training sessions on defense this week have been awesome.

What would you attribute the loss to?

Well, it was a lack of skill. Were dropping balls that we should be catching. Were not calling the balls in the air. Were running into each other. Not to take anything away from Canada, I thought they played well but I think the match would have been even closer had we been on.

We couldnt put the ball over the line. We just could not put points on the board. A lot of it was unforced errors because we just got in our heads a bit.

As a coach, where do you go as a squad with such a short turnaround?

Phaidra Knight had a standout game for you

Im not surprised at all how well Phaidra played. Im only surprised when she doesnt play like that! Shes been playing very well in the last few games.

You had an outstanding game, but does losing outweigh your personal performance?

It doesnt really matter who you lose to when you do, its just disappointing. Every loss is a springboard to success and we just have to learn from the mistakes we made today and correct them.

One of our biggest issues at this point is building our confidence and thats what led to a lot of the handling errors which I think were accountable in our loss. We have a young team and we have to turn that switch. Its just one of those things that just happens, and it can happen immediately or it can take a while but were running out of time so we need to make that adjustment relatively soon and just execute.

The US, we have very fit, very talented and very skillful players, but at the end of the day we need to execute better on the basics and thats what well take to the field tomorrow. And not just from now until Friday, thats until we set sail for England as well.

Do you expect any roster changes from today for Friday?

I do anticipate the coaches will make some change on the roster, but these are probably changes they already knew going into this match. Practices will probably get a lot more intense. They gave us the game plan and we just need to focus on the basics

Every failure is a springboard to success.