For the third consecutive year the Valsugana of Padua won Champion of Italy's Serie A title last weekend, beating Rugby Colorno – playing in their first Final - 32-0 in Calvisano. 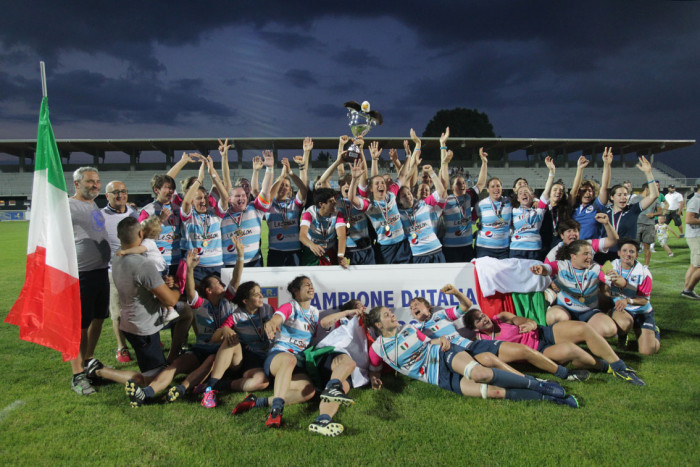 Both of the finalists came from the northern Girone 1 section of Serie A, which had been a close battle for the three playoff places. Colorno had swept all before them until the end of January, when they lost to 25-10 to Monza. They were still well placed until three games before then end when a 30-10 defeat to Rugby Rivera. Those defeats allowed Valsugana to top the pool, with Colorno having to beat them in the final pool game to finish as runners up – which they did, 10-3.

However, the superiority of the northern pool was amptly demonstrated in the playoffs, where Second and third in Italy play-off for the semi-finals, and the northern teams overwhelmed their southern opponents – Colorno thrashed Bologna 99-0, and Monza beat Montevirginio 39-7.

In the semi-finals Colorno dismissed the final southern team, Frascati, 51-7, while Valsuganna beat Monza 31-12 in the other all northern semi.

Having lost to their opponents in both games of the regular season Valsugana captain Elisa Giordano and teammates, in most important 80 minutes of the season, used all the experience gained during the season to control the ball from the beginning tp the final whistle.

The tactics were prepared by the coaching team of Bezzati and Frasson, while the boot of flyhalf Beatrice Rigoni ensured that play was almost entirely in their opponent’s half, while the breakdown was controlled by the pack.

Two yellow cards in the first half against the Rugby Colorno allowed the defending champions to take advantage of twenty minutes of numerical superiority. and to maximize the effectiveness of their strengths, with first a try from Ruzza and, in the twentieth minute, Folli finished off a passage started by Rigoni. In the second half the script was not dissimilar, with Valsugana dominating play until the final whistle.